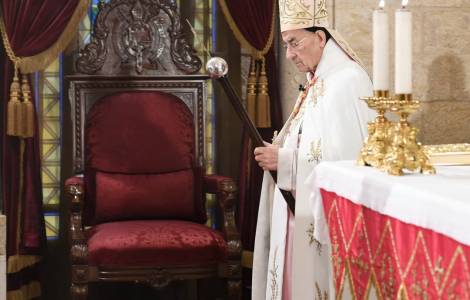 Beirut (Agenzia Fides) - The imposition of new taxes on citizens is understandable and tolerable in phases of economic recovery and growth, but would become a further factor of injustice and suffering for the people of Lebanon, grappling with a devastating crisis that is pushing the majority of the population below the poverty line. This is the clear judgment expressed by the Maronite Patriarch Béchara Boutros Raï, regarding the measures studied by the government, currently engaged in discussing the draft of the economic planning document for the current year prepared by Youssef Khalil, the finance minister politically linked to the President of Parliament, the Shiite Nabih Berri.
This morning, Monday, January 24, the Council of Ministers of Lebanon, chaired by Premier Naguib Mikati, returned to meet at the Presidential Palace of Baabda for the first time after a suspension of government sessions which lasted for three months, a further sign of the paralysis that seems to ensnare institutions and political blocs in the face of the systemic crisis experienced by the Land of the Cedars.
The critical assessments expressed by the Patriarch in the face of an increase in taxes were expressed by the Lebanese Cardinal during the homily he addressed during the Eucharistic celebration he presided over on Sunday, January 23.
In his homily, the Patriarch reiterated that in the serious phase experienced by the country, an increase in taxes would only have the effect of making the Lebanese economic collapse, further impoverishing families and affecting production activities. "Since the establishment of the State of Lebanon", the Patriarch said among other things, "economic liberalism has been the secret of Lebanon's prosperity, growth and progress, encouraging the growth of jobs and financial investments in all sectors, creating job opportunities and connections between the Lebanese economy and the world economy before the emergence of globalization". The economic collapse of Lebanon - added the Patriarch in his homily on the socio-economic analyzes "began with the weakening of Lebanese liberalism in its economic and social dimension".
The serious crisis in Lebanon actually also raises questions about the artificial and fragile nature of the economic revival registered in the country after the terrible years of the civil war. A recovery took place in a disorderly way, inflated by the real estate “reconstruction” bubble that cemented much of the coastal strip, with skyscrapers built by internationally renowned architects and shopping centers full of boutiques of fashion brands. A "recovery" which in reality was not based on a reasoned development of the real economy, and which was increasingly conditioned by the recipes of "financial engineering" and "creative finance" also followed by the Banque du Liban, the central bank headed since 1993 by Riad Salameh, former banker of Merrill Lynch. Now - the analysts underline - the situation has also been aggravated by the waning of economic support provided in the past by Arab Gulf countries, which have begun to spare their support for the Lebanese governments characterized by the important role of the Shiite Hezbollah party, linked to Iran. And if the Lebanese people have managed to survive this harsh winter, this is largely due to the remittances of the millions of Lebanese abroad who every month send aid to friends and relatives who have remained in their homeland. (GV) (Agenzia Fides, 24/1/2022)