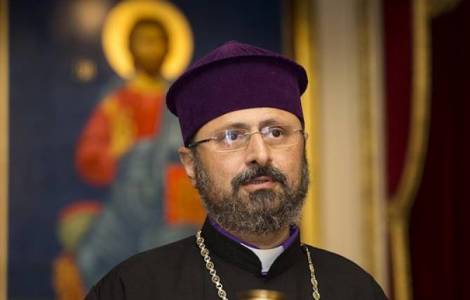 2022-02-28
Ukrainian President Zelensky telephones Patriarch Bartholomew: "We feel the support of your prayers"

2022-02-10
The ancient Monastery of Sumela used as a disco for an electronic music video. The government opens an investigation

2022-01-27
Erdogan confirms: new regulations and new elections for the Foundations of non-Muslim communities

Istanbul (Agenzia Fides) - The process of relaxation and normalization of relations, underway between Turkey and Armenia, is supported with decision and hope by authoritative representatives of the Armenian community on Turkish soil, starting from the Armenian Apostolic Patriarch of Constantinople, Sahag Mashalyan. The Head of the Armenian community in Turkey defined the measures "that strengthen relations between neighboring countries, both in terms of investments and cultural exchanges" as "precious". For Turkish citizens who belong to the Armenian Church - added the Patriarch in the statements relaunched by the national press - "it is also extremely important that relations improve day by day so that the two communities get to know each other, work together, make investments and in this sense rich cultural values meet on common ground".
The relations between Turkey and Armenia, tormented by the lack of a shared memory regarding the atrocious events of the Armenian Genocide, have registered a turning point after the armed conflict between Armenia and Azerbaijan, which in 2020 returned to inflame the Caucasus in a new, bloody phase of the historic dispute over Nagorno Karabakh, a region with an Armenian majority now included in the borders of Azerbaijan. The signing of the ceasefire, which took place on November 9, 2020 with the mediation of Russia, saw the clear affirmation of the Baku army, and ended six weeks of fierce fighting between Azerbaijani and Armenian troops sent from Yerevan. It provided for the withdrawal of the Armenian military forces from Azerbaijani territory, the return of the displaced to their respective areas of residence and the deployment of Russian troops as "peacekeepers" in Nagorno Karabakh for the next 5 years.
In Armenia, the end of the conflict, perceived as a defeat, triggered a heavy political crisis: the process of normalization of relations between Armenia and Turkey was triggered on the developments of that uncertain phase, also favored by the pressure exerted by Russia to Vladimir Putin, who continues to act as an energetic "mediator" between Yerevan and Ankara. Diplomatic relations between Turkey and Armenia have been frozen since 1993, the year in which the Turks closed the border with the former Soviet republic precisely because of the Armenian-Azerbaijani conflict around Nagorno Karabach, a conflict that has always seen the Turkish government firmly alongside Azerbaijan. Now, the first Turkish-Armenian bilateral meeting to bring about the relaxation of relations took place on January 14 in Moscow, in a climate defined as "constructive" by official Armenian sources. In the Russian capital, the President of the Armenian Parliament, Ruben Rubinyan, met Turkish ambassador Serdar Kilic, exchanging "preliminary opinions on the process of normalizing the dialogue between Armenia and Turkey". The parties agreed to continue the negotiations without preconditions. After the meeting in Moscow, Mevlüt Çavuşoğlu, Minister of Foreign Affairs of Turkey, also reiterated that the goal of the negotiations started is the "full normalization", adding that "even the Armenians are very happy with this". Turkey is also interested in the reopening of international flights between the two countries, scheduled for early February.
In addition to the statements of Patriarch Mashalyan, the Turkish daily Hürriyet also released the statements of Armenian entrepreneur Dikran Gülmezgil, President of the School Council of the Karagözyan Foundation, according to whom from now on Turkey "should act as the elder brother of Armenia", while Yetvart Dantzikian, director of the bilingual Turkish-Armenian newspaper Agos, declared that he considered the reopening of the borders between the two countries with optimism. (GV) (Agenzia Fides, 22/1/2022)