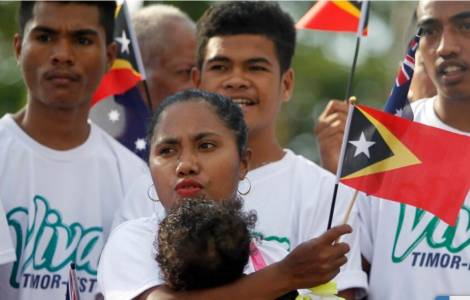 Dili (Agenzia Fides) - The people of East Timor see in the next presidential elections, scheduled for March 19, an opportunity for growth, prosperity and well-being for the country. "People in the country want to see the end of the political impasse and the economic recession", Acacio Pinto, a Catholic researcher and analyst of social sciences in East Timor, tells Fides. The presidential elections will be held on Saturday, March 19, 2022. The registration of candidates is currently underway. There will likely be eight candidates, three of them women. According to the polls, the favorites to contend for the seat are three figures: current president Francisco "Lu-Olo" Guterres; military general and former resistance leader Lere Anan Timur; and former President and Nobel Peace Prize winner José Ramos-Horta. A decisive boost for one of the three contenders, Acacio Pinto explains to Fides, could be the support of Xanana Gusmão, former leader of the resistance, former president and prime minister, currently leader of the opposition party in Parliament.
The presidential election campaign period runs from March, 2 to 16. The new president will take office on May 20, the date on which East Timor celebrates the 20th anniversary of the restoration of independence, starting a five-year term.
It is important, according to Pinto, to make an in-depth reading of the country's politics, from the last elections in 2017 to the present. The country was "caught in a political dead end", since the current president did not want to confirm the oath of seven ministers of the then ruling coalition due to alleged "corruption", triggering a long political crisis.
Subsequently, the second most voted party (the party of the current president - the Revolutionary Front of East Timor, Fretilin) became part of the coalition government, amid accusations of unconstitutionality that aggravated the political chaos. "Today, people want a new president who maintains the stability of the government, interpreting the constitutional law", says the analyst. According to Pinto, some of the central issues in the current scenario are: having a stable government that carries out the five-year mandate; return the economy to positive growth after the recession; address the crisis linked to Covid-19 at a social, political and economic level by finding adequate countermeasures. To this end, Pinto underlines, the priority is "investing in health, education, reducing malnutrition. It is necessary to increase internal revenues, have good governance, free from corruption, do justice to the victims of wars and give dignity to war veterans". The country will then hold parliamentary elections in March 2023. East Timor gained from Indonesia independence in 1999. It has a population of 1.3 million, 95% of whom are Catholic. (SD-PA) (Agenzia Fides, 21/1/2022)