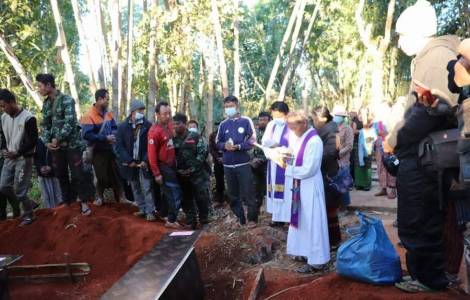 Loikaw (Agenzia Fides) - Three dead and seven wounded, all Catholics, so much terror and tears: this is the toll of the air raid that the Burmese army, "Tatmadaw", launched in the early hours of January 17, on refugee camps in the forests around Loikaw, the capital of the Burmese state of Kayah, in the east of the country. As sources in the local Catholic Church report to Fides, the refugees had fled from their villages and from Loikaw, which has now become deserted, while clashes raged between the army and the People's Defense Forces, spontaneous militias that appeared in the whole country following the February 1, 2021 coup. Among the internally displaced there are many Catholics, who have abandoned their homes and parishes to take refuge in the forests. In these wooded areas, densely populated with around 600 innocent civilians - the elderly, women, children - the "Tatmadaw" launched air raids that killed three people: two sisters, Natalia, 18, and little Rosetta, 7; and a man, Felice, aged 50. Another seven are the wounded in need of care. All had fled from the nearby village of Moso, where on December 24 the charred bodies of at least 35 civilians, all Catholics, were found, killed by Burmese soldiers in what was called "the Christmas massacre". This morning, January 18, the Catholic community gathered in the bush to celebrate a simple and sober funeral rite, amidst general emotion, while the Catholic priest, Fr. Jacob Khun delivered brief words to the memory of the victims, inviting to hope and prayer. In eastern Myanmar, fighting and aerial and artillery shelling continue. In recent days, the Church of the Sacred Heart of Jesus in Doukhu has also been affected, while churches are often turned into reception centers for refugees. Buddhist temples were also emptied and monks fled. The six Catholic parishes in the city of Loikaw are deserted, and the faithful, exposed to hunger, cold, poverty and violence, need material help and spiritual comfort. Displaced Catholics, notes to Fides Gabriel, one of the baptized in Moso, live "in persecution but trust in God, Savior and protector, in the certainty that he will not abandon us". We have nothing, we need everything, but the Lord will provide it". (JZ-PA) (Agenzia Fides, 18/1/2022) 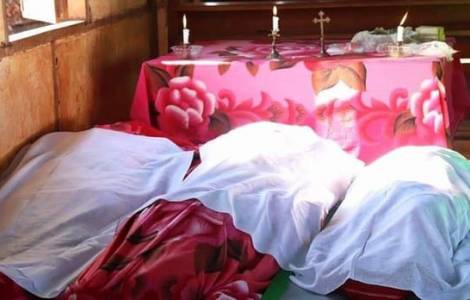