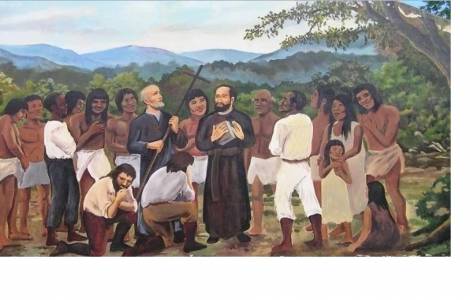 2022-01-07
Mar del Plata: concerns for the environment and integral development

2021-12-23
Faced with the legalization of gambling: we need to "promote the culture of work, not squeeze the poor"

2021-12-10
President of the Episcopal Conference: Mission is a priority

2021-10-30
All Saints' Day: Litanies of Argentinian Saints and Blessed

San Ramón de la Nueva Orán (Agenzia Fides) - On October 13, 2021, Pope Francis confirmed the martyrdom of the Servants of God Pietro Ortiz de Zárate, diocesan priest, and Giovanni Antonio Solinas, priest of the Society of Jesus, who on October 27, 1683 in Valle del Zenta (Argentina) together with a group of lay people, including some Indians who had converted to Catholicism were killed out of hatred of the faith (see Fides, 15/10/2021).
The Committee of the diocese of San Ramón de la Nueva Orán, under the direction of Bishop Luis Antonio Scozzina, is now preparing a historic ecclesiastical event, which is planned for July 2022. The exact date is still to be confirmed. The committee, supported by a Secretariat, a Communications department, Pastoral Animation, Liturgy, Culture, a department for Resources and Finance and two offices for Infrastructure (in Oran) and (Pichanal) and has the support of the diocese of Jujuy. A bank account has also been set up for those who wish to contribute to the organizational costs that this event entails.
The history of the martyrs dates back to the year 1683, when in the Zenta valley, 3 kilometers from Pichanal, in the chapel of Santa María, the Argentine priest Pedro Ortiz de Zárate, vicar of Jujuy, of the Italian Jesuit father Antonio Solinas , both missionaries, and their Creole and indigenous companions were martyred.
The two priests had gone to the area of the Chaco Salteño to preach the word of God to the natives, but were killed by the Tobas and Mocovíes: about 500 natives beat the missionaries with clubs and finally beheaded them. The remains of Father Pedro Ortiz de Zárate were brought to the Cathedral of Jujuy and those of Father Solinas to the ancient Jesuit Church of Calle Caseros y Miter, where he was buried near the altar. The others were buried in the place of his martyrdom. Every year in October a pilgrimage takes place from the city of Pichanal to the place of martyrdom, about 3 kilometers away, presided over by the Bishop of Oran. (SL) (Agenzia Fides, 3/1/2022)

AMERICA/EL SALVADOR - On January 22, the beatification of four martyrs: witnesses of an outgoing Church, which announces the Kingdom of God with words and deeds