ASIA/SYRIA - Father Jacques Mourad: the monastery of Mar Elian, devastated by jihadists, could soon return to being a place of prayer and peace 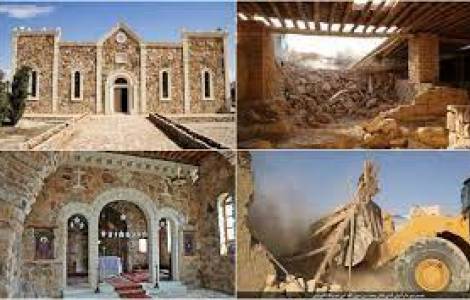 Quaryatayn (Agenzia Fides) - The ancient Monastery of Mar Elian, located on the outskirts of the Syrian city of Quaryatayn, which in 2016 had been devastated and desecrated by jihadist militiamen, could soon return to being a place of prayer and peace for the Syrian Christians and also for their fellow Muslim destinies. It was announced with joy by Father Jacques Mourad, the monk of the community of Deir Mar Musa who was kidnapped in Mar Elian on May 21, 2015 by a commando of jihadists of the self-styled Islamic State, and lived long months of imprisonment, first in isolation and then together with more than 150 Christians of Qaryatayn, also taken hostage in the territories then conquered by the black Caliphate. The rebirth of the Monastery of Mar Elian - reports Father Jacques in the message also sent to Fides - will be made possible thanks to an agreement between the Syrian-Catholic archieparchy of Homs, Hama and Nabk and the monastic community of Deir Mar Musa, founded by Father Paolo Dall'Oglio, the Roman Jesuit whose traces were lost on July 29, 2013, while he was in Raqqa, at that time the Syrian capital of Daesh.
In his message, Father Mourad asks everyone to pray so that at this moment the parishioners of Qaryatayn will be able to discern "God's will for the future of this important geographical area of Syria, our Country".
Mar Elian's rebirth plan, outlined by the monk of Deir Mar Musa, initially envisages the replanting of vineyards and olive groves on the land around the monastery, together with the reconstruction of the surrounding walls and access doors. Then we will try to encourage the return to Qaryatayn of the Christians who lived there and who were forced to flee during the war, supporting the reconstruction of their homes, the revitalization of crops and activities that guaranteed their economic independence before everything was devastated by the conflict. If this first phase proceeds well, the actual reconstruction of the monastery and the parish church will be carried out, as well as the archaeological recovery works around the tomb of the Saint, "which will not be easy after the devastation suffered".
The news of the revival project of the Qaryatayn monastery is shared by Father Jacques trusting that it will arouse joy and consolation in knowing the tenacious spiritual bond between that monastery and the vocation of the monastic community of Deir Mar Musa.
Currently, fewer than 10 thousand Muslims live in the Qaryatayn area, while Christians are only 26. But similar experiences, such as those of Christians who have returned at least in part to the Iraqi villages of the Nineveh Plain - from where they had fled in front of the advancing militias jihadists - encourages "to follow in their footsteps", and not to surrender to the processes that are extinguishing the presence of indigenous Christian communities in entire Countries of the Middle East.
In the years preceding the conflict, the ancient Sanctuary of Mar Elian, dating back to the 5th century, had been affiliated to the monastic community of Deir Mar Musa and had experienced a time of flourishing, also surrounded by the sympathy of the prevailing Muslim population. Under the guidance of Father Jacques Mourad, who at the time held the function of Prior. Then, in February 2015, Father Jacques was kidnapped by the jihadists, who took control of the entire area in the following August. Since the first days of the jihadist occupation, the tomb of Mar Elian had been brutally desecrated, to erase what, even in the eyes of the Islamic State affiliates, represented the heart of the monastic complex. But the relics of Mar Elian, scattered around the tomb of the Saint, had not been lost: in particular, the bones of the Saint had been found, collected and transferred into custody in Homs in April 2016, after the end of the jihadist occupation of the area (see Fides, 5/4/2016). Already then, Father Jacques Mourad confided to Fides what his hope was: "We know that the old sanctuary was razed to the ground, that the archaeological site was devastated, while the new church and the monastery were set on fire and partly bombed. When, in the future, we return to work in Mar Elian, we will also put the relics of the Saint back in their place. The life of grace will blossom again around the memory of the saints. And it will be a great sign of blessing for our whole Church". (GV) (Agenzia Fides, 28/12/2021)