AMERICA/PARAGUAY - The Bishop of Caacupé: "we have an obligation to 'organize hope' in order to leave the pandemic and impunity behind" 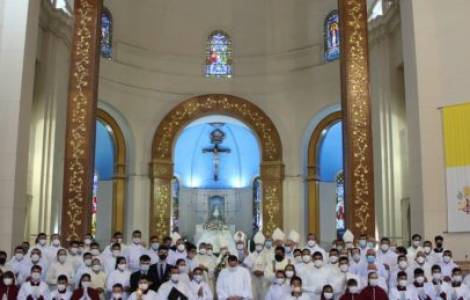 Caacupé (Agenzia Fides) - "We have an obligation to 'organize hope' in Paraguay in order to leave behind the effects of the pandemic and put an end to the national epidemic of impunity, because corruption also kills". This is the exhortation of Mgr. Ricardo Valenzuela Ríos, Bishop of Caacupé, in his long letter to the Paraguayan people, entitled "Let's organize hope", published on December 8, on the solemnity of the Immaculate Conception of Mary, the day on which the Chileans honor the Virgin by invoking her as "Our Lady of Miracles", Patroness of Paraguay, by going on pilgrimage to her shrine in Caacupé.
Inspired by Pope Francis' homily for the 5th World Day of the Poor, the Bishop explains in his letter that "it is a question of laying, through social and political commitment, the foundations in order to alleviate the suffering of the weakest and most destitute of the human community. This objective leads us to examine our reality and plan ways of solution". After the shock suffered by all humanity in 2020 with the pandemic, this year can be considered the time to recover from this negative life experience, the consequences of which are beginning to emerge in the field of physical and mental health, in the global economy and in that of every family, especially needy families. Many of the people who died from Covid could have been saved or would have lived longer if the government's reaction had been more effective and less weak, writes the Bishop, who emphasizes: "according to the Christian conception, the raison d'etre of authority is to serve the people ... and not seek the first places". He then points out the many deaths due to negligence and corruption, asking that the right to health be respected for everyone, not just for the high-ranking members of the state. "We must recover from this negative situation and take advantage of this harsh experience to change and make the world, and our country, more livable, a better place to share life and the goods that God has bestowed on everyone", continues the Bishop.
Pope Francis asked Christians to "organize hope, translate it into the concrete life of every day, in the interest of others, for human relationships, for social and political commitment and for ecclesial life", remembers Mgr. Valenzuela Ríos , highlighting that "with the pandemic we have discovered that in addition to being rich, we are all poor at the same time", then reflects on what wealth and true hope are, so that no one lets himself be plunged into pessimism.
"It is necessary - always echoing the words of the Holy Father - that politicians and governments put aside sectarianism, privileges, sometimes exaggerated, poorly obtained wealth and work for the common good, trying to adapt the country's economic model to one that has a human face. Enough with the meanness, with the excessive accumulation of money and resources in a few hands, which has its counterpart in the exclusion of many. Everyone will remember that, at the beginning of the pandemic, with natural fright, many beautiful promises of reform were made, most of them forgotten!" denounces Valenzuela Ríos.
The Bishop then hopes that those who have assumed the highest judicial roles "do justice as they promised to do before being appointed"; the new municipal authorities keep in mind their commitment "for faith, for the people and for their families"; in political disputes "the force of reason" should always prevail and not violence in order to obtain power. Kidnappings, murders, extortions are "the sad reality that several families have endured and endure", he continues, so "it is necessary that we realize the need for change in our country as a generator of violence". Even public education is always marginalized, regardless of the political sign of the successive governments. "The country must change as soon as possible - emphasizes the Bishop -. We need leaders who are righteous, honest, healthy, trustworthy, committed to the truth, helpful and ambitious in the fulfillment of their plans and promises". "Paraguay, our beloved country, has great challenges ahead of us", concludes Mgr. Ricardo Valenzuela Ríos, exhorting: "Let us organize hope among all. No one is excluded from this mission and no one must prevent it". (SL) (Agenzia Fides, 9/12/2021)

ASIA/CHINA - The diocesan Seminary of Beijing opens the Marian Month: "Like Mary, we bring grace and joy freely received to all"