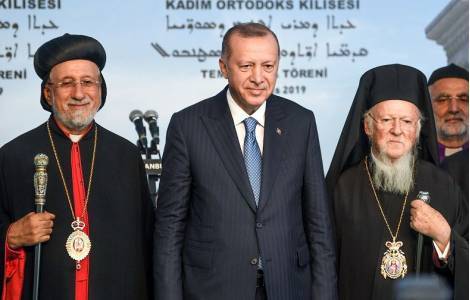 2021-11-12
In the United Kingdom and Israel, new legislative proposals to sanction the recognition of the Armenian Genocide

Ankara (Agenzia Fides) - The Turkish government is preparing to issue a new regulation on the administrative management of Foundations linked to non-Muslim faith communities, which have been paralyzed for years by a legislative impasse which effectively blocks the renewal of their respective governing bodies.
In Turkey, the management of minority foundations closely affects the life of local Christian communities, starting with the Armenian one. These bodies are in fact entrusted with the management of places of worship. Real estate and public institutions linked to different non-Muslim communities, including Jews. In recent days, Burhan Ersoy, Director General of the Foundations, confirmed that the plan for the drafting of a new regulation concerning above all the elections for the assignment of offices within the Foundations has come into being, that the draft of the text, now under study, has been drawn up, taking into account requests and proposals from the various minority communities, and it is expected that the new rules, after obtaining government approval, could enter into force by April 2022. The previous electoral regulation for the top management of foundations had been suspended in 2013, after the government had made a commitment to establish new procedures and had justified the measure with the declared intention of wanting to make the management of real estate more functional and transparent. In his statements to the Turkish media, Ersoy was obliged to point out that during the consultations, representatives of the various minority communities did not express unanimous opinions on the criteria that should guide the drafting of the new electoral rules, and some of them asked for the simple reintroduction of the old procedures suspended in 2013. Meanwhile, Syrian Orthodox Christian Süleyman Can Ustabaşı, current representative of the non-Muslim Foundations within the Assembly of Foundations, asked the Turkish authorities to carry out another round of consultations with the representatives of minority communities before completing and approving the final version of the new regulations.
The legal status of the Foundations is still based on the Peace Treaty of Lausanne, signed in 1923 by Turkey and the Entente powers (British Empire, France and Russian Empire) victorious from the First World War. The Treaty guaranteed equality before the laws and the freedom to promote and manage "religious and social institutions" for non-Muslim communities of faith present in Turkey.
In the last two decades, Turkey has faced and resolved with a growing part of the controversial issues relating to the management and destination of property seized by the State on which the Foundations claimed the rights guaranteed by the Treaty of Lausanne. According to official data provided by the Turkish apparatuses, and reported by the pro-government newspaper Daily Sabah, between 2013 and 2018 about 1,084 properties were returned to the Foundations linked to non-Muslim communities, and to the same communities 20 places of worship were given after the necessary restorations. In the past, starting from 1936, legislative provisions had opened the possibility of acquiring new properties to the Foundations of non-Muslim communities. Then, in 1974, this guarantee was canceled and the State had begun to massively seize the assets acquired by the Foundations of non-Muslim communities since 1936. After 2000, new provisions issued in accordance with Turkey's harmonization packages for EU membership favored the return to the Foundations of real estate previously seized by the State. Recently, it was Turkish President Recep Tayyip Erdogan himself who confirmed - after a cabinet meeting held on Monday October 25 - that the competent authorities had put on the agenda the question of the elections of the directorates and boards of directors of the Foundations linked to the communities of minority faiths, fundamental tools for the management of assets and resources destined for non-Muslim places of worship. As already reported by Fides (see Fides, 6/11/2021), Greek Orthodox Laki Vingas, member of the Council of Foundations, in a long speech published by the Armenian-Turkish newspaper Agos documented the negative effects on the life of the different ecclesial communities caused by the legislative deadlock on the question of the regulations of the Foundations. The block in the processes of renewal of the governing bodies of foundations - noted Vingas - contributes to the processes of expulsion of young people from the institutions linked to their communities, and also many voluntary activities "are unfortunately interrupted". Within the general Assembly of the Turkish Foundations, the representative of the non-Muslim Foundations speaks on behalf of the network of 167 non-Islamic community Foundations present in Turkey. 19 "minority" Foundations are linked to the Jewish community, while the others are linked to various Christian communities. 77 Foundations belong to the Greek Orthodox community, while 54 Foundations refer to the Armenian community. (GV) (Agenzia Fides, 7/12/2021)