ASIA/VIETNAM - Missionaries like Francis Xavier: 38 new priests, a gift for the Church 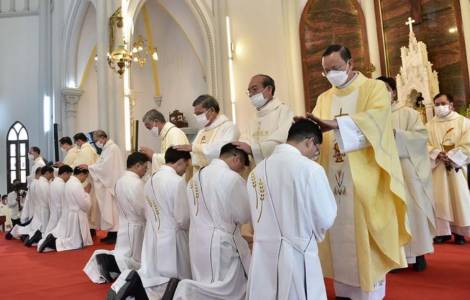 2021-11-16
In the name of compassion, believers of different faiths help the sick and suffering

Hanoi (Agenzia Fides) - The season of Advent in the Church in Vietnam begins with a great gift: 38 new priests are starting their pastoral service in various dioceses. As Fides learned, the priestly ordination rites were solemnly celebrated on the feast of St. Francis Xavier, Patron of the Missions, with the specific intention that priests become missionaries inspired by the saint.
On December 3, Mgr. Emmanuel Nguyen Hong Son, bishop of the diocese of Ba Ria, in southern Vietnam, presided at the Mass for the ordination of 6 Jesuit priests in the chapel of the Academy of St. Joseph. The Bishop told the faithful: "Let us not give these candidates a title of power. We are following the liturgical rite handed down from the time of the Apostles to the Church today and forever. The priesthood is for them a grace and a mission, in order to carry out the priestly ministry of Jesus". The Bishop asked all those present at the Mass to pray "so that new priests may live the prophetic mission, in preaching the Word of God to the faithful".
Also in the Archdiocese of Hanoi the community rejoiced for 15 new "workers in the vineyard of the Lord". "May the new priests become skilled reapers, eager to go out into the fields to bring souls to God", said the Archbishop of Hanoi, Msgr. Joseph Vu Van Thien, at the beginning of the Mass. The Prelate recalled the characteristics of the priestly and missionary ministry: "Those who receive the Sacrament of Order participate in the priesthood of Jesus, which is unique and is like a river that flows through the history of the Church. This flow of the communion of faith and priesthood from Jesus flows through the apostles, and reaches to this day through the bishops and priests. Furthermore, the missionary character is very important: priests are called to become missionaries, sent into the stream of life to spread the Word of God, bearing witness to Jesus Christ with their lives and gathering lost sheep".
Further north, in the mountainous diocese of Lang Son, welcoming 9 new priests, Bishop Joseph Chau Ngoc Tri said: "Priests preach Jesus Christ, the love of God and his salvation for all humanity. To become a priest and missionary like St. Francis Xavier, you need to have a heart inflamed by the passion for the evangelizing mission". The Prelate reminded the candidates: "The priesthood is not a power to rule. These candidates have heard God's call to come to this remote mountainous area, far away from friends and relatives, to serve the people of God here. Lang Son is a poor area where the majority of ethnic groups speak different languages, following ancient cultural or religious practices. Despite those difficulties, the new priests, inspired by missionaries such as St. Francis Xavier, plant the seeds of faith without fear or discouragement". Lang Son is known in Vietnam as the diocese with the lowest percentage of faithful in the country: about 7,000 Catholics live in 24 parishes which represent 0.35% of the total (out of 1.7 million inhabitants), compared to the national average, about 8% of Catholics in Vietnam.
It is located in the rugged mountains in Northwest Vietnam, bordering China, with a total area covering the three mountainous provinces of Ha Giang, Cao Bang and Lang Son, where most of the ethnic minorities reside. Also in the other mountainous diocese of KonTum, in the central highlands of Vietnam, on December 3, Bishop Aloisio Nguyen Hung ordained 8 priests and 9 deacons. In his homily he stressed: "All priests and deacons need four things: closeness to God; closeness to the Bishop; closeness to members of the clergy; closeness to the People of God". He also shared KonTum's "special missionary vocation" with the candidates: "The peculiarity of the KonTum diocese is that people of different ethnic groups and languages represent more than two thirds of the total number of faithful. Therefore, deacons and priests must be ready to go to parishes inhabited by indigenous people with local dialects and learn at least one of their languages so that they can communicate and be understood".
The Bishop continued: "The task of priests is to preach the Gospel, to guide the faithful to live the Word of God, to take care of the parish community: consequently they are seen as the leaders of the community. But a leader in the style of Jesus is completely different: he is a servant of the people, he lives pastoral charity following the example of Jesus". The diocese of KonTum is one of the regions with the most abundant life of faith in the country: with about 342 thousand faithful divided into 101 parishes, Catholics are 18.6% of the population, which in total has 1.8 million inhabitants. It is also the oldest diocese on the central highlands covering the provinces of GiaLai and KonTum, inhabited by ethnic minorities. (AD-PA) (Agenzia Fides, 6/12/2021) 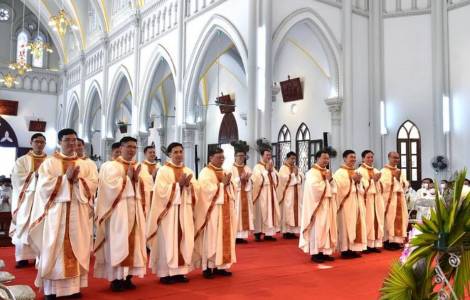