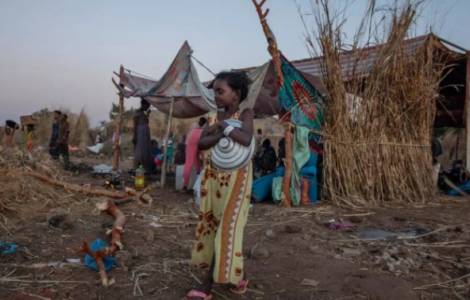 Adigrat (Agenzia Fides) - "Like all Tigrayans, the Catholic Church has been seriously affected by this genocidal war waged against us by the local army and by foreign armies. Physical, psychological and spiritual attacks on our laity, priests, nuns and on our structures, places of worship, parish residences, schools, health centers, offices. Among other things, 14 vehicles of the Catholic Diocese, desks, computer devices, solar panels, laboratory equipment, medicines were looted". After months of silence due to the total blocking of communications, the Church of Tigray renews its call for an immediate peaceful solution to the conflict, which has turned into a humanitarian crisis. In the statement sent to Fides, the bishop of the Catholic Eparchy of Adigrat Msgr. Tesfaselassie Medhin (see Fides, 15/1/2021) stressed that people sufferfrom epidemics, chronic diseases and new diseases. "The government's response has been to engage in an ethnic cleansing war, which has deprived the country of everything from humanitarian aid to the ability to access any basic services, such as medicine, electricity, telephone, internet, air and land transport, etc…"
The Prelate reiterated with force the firm opposition of the Catholic Church of Tigray to all these atrocities and launched a repeated appeal to the authorities, to partner organizations in Ethiopia and abroad. "What is happening is that instead of trying to find a peaceful solution, in recent weeks and days the process of destruction is escalating". Msgr. Medhin referred in particular to the detention of the Provincial of the Congregation of the Salesians of Don Bosco in Addis Ababa, as well as to the detention of members of the community and of the staff of their offices (see Fides, 9/11/2021), as well as the detention of all Tigrayans in the capital and throughout Ethiopia. "We call for all atrocities and crimes to be investigated by an independent international body, for an immediate end to the bombing of civilians, ethnic cleansing, detentions of Tigrines and church members. We call on the Ethiopian Catholic Church, located in Addis Ababa and the rest of the regions, to come out of its silence and ask for justice against the persecutions and atrocities that have been inflicted on Tigrayans, priests, nuns, laity at the service of the faithful in respective ecclesiastical jurisdictions".
Msgr. Tesfaselassie insists that the commission that was supposed to investigate war crimes and the ongoing genocide has so far failed to describe the reality or to do justice to the principles of the commission. "They have never visited the affected localities, places that we know, without identifying or meeting the surviving victims, and seem to fail to recognize these atrocities as real war crimes and genocides. On the contrary, they are real crimes confirmed not only by the victims and the government of Tigray, but recognized and attested by numerous organizations and independent media around the world. The report by the Ethiopian Commission for Human Rights and the United Nations High Commissioner for Human Rights is incomplete and does not reveal the truth. We demand an end to the aerial bombardments which have already destroyed lives, property, civilians and institutions". The Bishop concluded by expressing his full solidarity, sharing and assuring his prayers: "We stand in solidarity with all the people who suffer in all regions of Ethiopia and we ensure our spiritual closeness as the Catholic Church of Tigray". (AP) (Agenzia Fides, 25/11/2021)