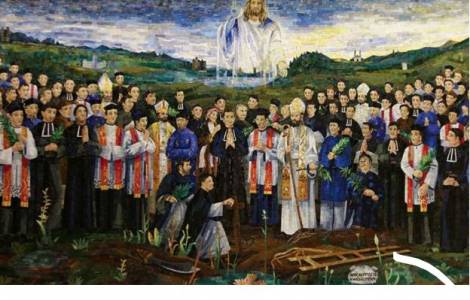 Ho Chi Minh City (Agenzia Fides) - On November 24, the universal Church celebrates in the liturgical calendar the feast of Andre Dung Lac and the Vietnamese martyrs: their example and heroic stories are vividly relived in the churches of the 26 dioceses of Vietnam which solemnly celebrated the liturgical feast yesterday with the Vietnamese parishes of the faithful of the diaspora in the world. On this important day, the faithful sang songs of praise to the martyrs and the churches rang the bells with pride and joy. Vietnamese Catholics love to dedicate noble sentiments and prayers to martyrs, recognized as faithful intimately united to the heart of the Son of God, who despised death and worldly interests and, faced with death, were not afraid to choose God. The 117 martyrs canonized by St. John Paul II in 1988 are only a very small number compared to the more than 100,000 people who were imprisoned and painfully died in Vietnam under the Nguyen dynasty during fierce persecutions between the 17th and 19th centuries. They were Vietnamese and foreign bishops, priests, religious and parishioners. They did not want to be commemorated by the world, nor to be honored by posterity: blessed with divine grace, they found happiness and victory in God himself. They died in the heat of genuine faith.
"The mystery of martyrdom is a testimony of God, martyrdom does not mean the opposition between atheism and theism, nor a conflict between different religions. Martyrdom is understood simply as a testimony of the noble values of the Gospel, a testimony of the saving love of Jesus", said Archbishop Joseph Nguyen Nang, of the Archdiocese of Ho Chi Minh City, yesterday, November 24, during the liturgical celebration of the Vietnamese martyrs. "Martyrdom is not only a mystery, but also a grace. The martyrs presented themselves before the high officials as a firm witness to the faith and love of God, through the power of the Holy Spirit. The martyrs were ordinary people, even ignorant peasants but, in front of the king and the high imperial officials, they reacted in a very wise, judicious and confident manner. This was a grace of God, not the work of man. They too were human beings in flesh and blood, as weak as us. If they could endure all the lashes, the chains and the cruel tortures, it was truly the grace of God and his power, which dwelled in them, that made it possible". The Prelate concluded: "The spirit of martyrdom is still necessary in today's civilized world where there are forms of persecution: at times it is an external violence or an internal psychological pressure. That is why everyone must witness to God in today's society by always choosing the right values of the Gospel, by living according to the Word of God, by not letting bad events shake our faith and separate us from the love of Jesus. The attractions of worldly life are flattering, but we must say categorically "no", and not compromise with evil. The martyrs remind us to always be faithful to the law of God: today we are called to follow their example and the courageous witness of faith, for which they suffered pain, in order to obtain eternal life".
Martyr Andre Dung Lac was a Vietnamese priest who was executed by beheading in 1839. On his way to the place of execution, he prayed in silence and sang aloud words of praise to God. Before the execution, the executioner approached him and told him: "We do not know what crime you committed, but we are only carrying out the order, please understand". With a big smile on his face, Father Lac replied: "The commander has ordered, so do it". And before giving his head to the executor's knife, he asked for the last few minutes of quiet to pray. "Your Majesty, I have served for over 30 years under three different kings and am always faithful to you as a citizen and patriot with all my heart; but today I will accept any punishment from you for not betraying my faith in Jesus Christ, as long as I am faithful to him", said Michael Ho Dinh Hy, one of the Vietnamese martyrs who held a high position in the imperial court. He did not give up his faith for worldly prestige, but preferred to remain faithful to God even if it cost him his life, as it did in 1857.
Despite the king's temptations, he remained steadfast in his faith and tried to live like Jesus Christ, refusing all the material privileges and glories given by kings. Martyrs such as John Théophane Vénard of the Society of Foreign Missions of Paris (MEP), when arrested and tried in court, were invited to stand on the cross to be acquitted, but they categorically refused. John Theoane Venard answered unequivocally: "I adore the Cross and have preached for all of my life the Cross, the way of love, how could I irreverently trample on the Cross now? My life would not be worthy of my faith in God if I denied this belief". He was martyred in Tonkin in 1861. (AD-PA) (Agenzia Fides, 25/11/2021)

AMERICA/SAN SALVADOR - Beatification of the four martyrs, the diocesan Postulator: "Our vocation is to follow the Lord"