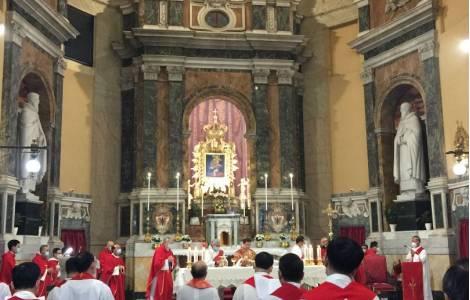 Rome (Agenzia Fides) – To celebrate with faith and devotion the Feast of the Vietnamese Holy Martyrs, canonized in 1988 by Pope Saint John Paul II: in this spirit, on the eve of the feast of Christ the King, more than two hundred members of the "Association of Religious and lay Vietnamese", who study, live and carry out their various missions in Rome, gathered, together with various groups of pilgrims from the United States and Europe, in the Sanctuary of Santa Maria delle Grazie alle Fornaci, near the Basilica of St. Peter.
“Sanguis Martyrum, semen Christianorum” - “The blood of martyrs, seed of Christians”. The words of the apologist Tertullian were reiterated at the liturgical assembly as a reminder and a challenge from the sharing by Msgr. Tran Manh Duyet, vice-postulator of the cause of canonization of the Vietnamese holy martyrs, who presided over the solemn commemoration mass, celebrated in view of the liturgical feast of those martyrs on November 24.
On June 19, 1988, in St. Peter's Square, Pope St. John Paul II canonized 117 Vietnamese who shed their blood to bear witness to the Gospel of God between 1745 and 1862, among them 21 missionaries from Spain and France, together with 96 Vietnamese. This number, however, is only representative of the more than 100,000 martyrs of Vietnam during the period from the 17th to the 19th centuries.
"The canonization of such a large group is an unprecedented event" - said Mgr. Tran - "The preparation process was a real challenge, since one of the essential conditions for the canonization of a saint is that there has to be at least one miracle. But a miracle for each of the whole group was almost impossible. Thanks be to God, by his benign will, Holy Pope John Paul II recognized an undeniable miracle, that is, the miraculous development of the Church in Vietnam through a long history of persecution. Starting from scratch, the number of Catholics at that time has grown to nearly 6 million".
Celebrating and reviving the heroic examples of the life and faith of the holy ancestors - the faithful present noted - is a significant source of encouragement for Vietnamese Catholic communities, especially in the difficult situation of the pandemic.
Belonging to a small people who have survived so much suffering from war and hatred, Vietnamese Catholics draw from their origins an inexhaustible strength to continue moving forward towards a brighter future. (CGA-PA) (Agenzia Fides, 22/11/2021)