AFRICA/eSWATINI - The Bishop: "For social peace, national dialogue is urgent, do not postpone it to March" 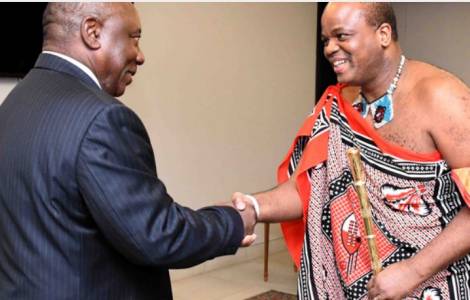 Manzini (Agenzia Fides) - "The situation is not predictable, it has been calm in recent times, but we must bear in mind that there is still a curfew from 9.00 pm to 4.00 am to control and prevent possible riots. In addition, the security forces in all cities are present and visible on the streets. We hope that all interlocutors are able to control the risk that is being taken, young people are frustrated, tired of waiting and see no signs of a better future". This is what Mgr. José Luís Gerardo Ponce de León, Consolata Missionary and Bishop of Manzini, the only diocese of eSwatini, reports to Fides. The small country surrounded by South Africa and bordering to the east with Mozambique, the last absolute monarchy of Africa, despite a thousand difficulties and social tensions, lived up to a few months ago in relative tranquility. Last June, mass demonstrations against King Mswati III and his autocratic tendencies took place for the first time. The police response has sparked social chaos. The Bishop continues: "Last November 2 we received the visit of the President of South Africa Cyril Ramaphosa as the current leader of the Southern African Development Community (SADC) and it was an interesting occasion because in the past SADC has always given the impression of ineffectiveness. In July, for example, after a visit and a subsequent report, the result of an observation and a dialogue with civil society, they delivered the final document only to the government, without making it public. Ramaphosa's visit, on the other hand, triggered something new, first of all because for the first time he came in person and then because, after his intervention, there was a declaration issued by the two governments. It was confirmed that the reign of eSwatini will continue on the path of national dialogue as requested by many parties. The agreement says that the eSwatini government and the SADC will proceed to indicate the road map for dialogue but - we ask ourselves - will the people have a say and their needs will be listened to?". The king announced that the dialogue will not start before the celebration of INCWALA, the national holiday that will be celebrated in March 2022. This means that there will be other months of dangerous tensions. "Since the riots broke out - observes the Prelate - we repeat that dialogue is urgent. Now, postponing it to March means blowing on fire".
Mgr. Ponce de León: "There is, then, another serious problem. Due to the pandemic, schools were closed until a few months ago when, finally, the government decided to open them completely. The students, however, made their voices heard and staged demonstrations. The government, therefore, since October 22, has closed the schools again, not for the pandemic, but for alleged security issues and has declared that they will shortly reopen but that entry will be allowed only to those children whose parents will sign a form that authorizes the school to suspend the pupil, if the pupil takes part in riots or manifest dissent.
It is a very divisive and problematic provision. As you can easily imagine, many parents will not want to sign, others will be forced to allow their children to go to school but it is clear that there will be discrimination". The Bishop concludes: "Our hope is that the SADC and the government will publicly release guidelines for national dialogue and that certain dates are known, this will help us in the future. The next few weeks will also be crucial because the trial of two members of parliament arrested after the riots will be celebrated. When there was the trial in the first instance, a lot of social turbulence followed, we hope that measures will be taken to guarantee calm and social peace". (LA) (Agenzia Fides, 11/11/2021)