ASIA - Promoting peace in Afghanistan, Korea and Myanmar: the commitment of the Asian Conference of "Religions for Peace" 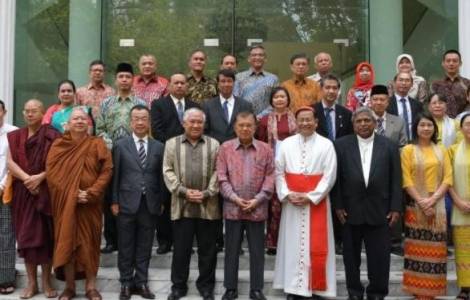 Tokyo (Agenzia Fides) - Promoting, supporting and implementing, through dialogue and interreligious collaboration, awareness of the dignity of all forms of life; the fight against human trafficking; peace building and reconciliation in Asia; environmental protection; youth leadership development are the commitments undertaken by the "Asian Conference of Religions for Peace" (ACRP), promoted by the organization "Religions for Peace - Asia". After the general assembly, which took place in Tokyo in October, the solemn "Tokyo Declaration 2021", has now been drawn up and published, announcing the creation of a special fund to finance projects that meet the objectives set out.
In the text of the Declaration, sent to Fides, it is stated that they want to "involve young members in the decision-making process at all levels since young people are the hope" of the present "and also to involve women.
Among the scenarios in which the ACRP intends to make a special contribution, there is North Korea where, through the Korean Council of Religious and the Korean Conference of Religions for Peace (KCRP), intends to promote humanitarian activities and promote the signing of the treaty of peace between the two Koreas, with a cultural work of "education for peace". Among the other countries expressly mentioned, in which to promote peace and reconciliation, there are also Afghanistan and Myanmar.
The Conference engages in awareness-raising activities to eliminate nuclear weapons and in promoting the conversion of defense budgets, in different nations, to funds for the promotion of peace-related activities.
According to ACRP, it is necessary to support the dialogue of peace with governments, international organizations and religious communities, in a virtuous network and partnership, including, solidarity and environmental protection, using social media platforms in a positive way, and also with public events, prayers, conferences, seminars and webinars.
The goal is to reaffirm the social responsibility of religious communities, through dialogue and inter-religious cooperation, in supporting the spirit of equality, respect, inclusion, reconciliation. The organization will take concrete actions to implement the principles and strategic actions in order to "build together an all life community on earth" at the benefit of future generations. (PA) (Agenzia Fides, 11/11/2021)