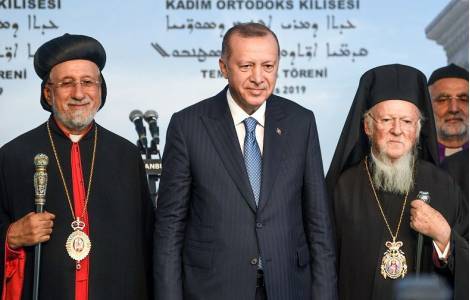 Ankara (Agenzia Fides) - Apparently contradictory and difficult to decipher signals are coming from the different levels of Turkish power regarding the state of difficulty in which foundations and schools linked to minority religious communities have found themselves for some time.
In recent days, the planning and budget commission of the Turkish Ministry of Education has by majority rejected a motion presented by the Armenian parliamentarian Garo Paylan, in which he asked to allocate part of the ministerial budget of 2022 to support educational institutions linked in various ways to the local Christian and Jewish communities. Mr Palyan, current Co-president of the HDP (People's Democratic Party, an opposition group that brings together Kurdish political organizations and left-wing forces) had proposed to allocate 40 million Turkish lira to Armenian, Greek, Jewish and schools linked to other minority communities, educational institutions that had also been severely affected by the pandemic crisis. The Armenian parliamentarian's proposal, reported in the minutes of the commission meeting of November 2 and reported by the Armenian-Turkish newspaper Agos, referred to the sum of 10 to 12,000 Turkish liras that the Turkish Ministry of Education allocates annually to each public school student. About 4,000 pupils currently attend minority schools. If one calculates 10,000 Turkish liras for each pupil attending minority schools ", argues Paylan," an allocation of 40 million Turkish liras in favor of these educational institutions would represent a simple measure of justice, in accordance with the declared intention. Turkish authorities not to encourage discrimination on ethnic and religious grounds. "Palyan's motion was rejected by representatives of the AKP - the party of President Recep Tayyip Erdogan - present in the commission, but the abstention from the deputies of the CHP, the Republican People's Party, heir to the "secular" Kemalist tradition, also contributed to its defeat.
On the controversial issue of foundations linked to religious minorities, paralyzed for years by a legislative deadlock which effectively blocks the renewal of their governing bodies, President Erdogan himself confirmed, after a council of ministers held Monday, October 25, that the competent authorities had put on the agenda the question of the elections of directors and boards of directors of these institutions, which are fundamental instruments for the management of property and resources intended for non-Muslim places of worship and for initiatives promoted by minority religious communities.
The regulation which allows minority foundations to choose their own board of directors was repealed by the General Direction of Foundations in 2013, without its reform having been announced since. Recently, Greek Orthodox Laki Vingas, member of the Council of Foundations, documented in a long article published in Agos the negative effects of this impasse on the life of the minority church and religious communities. The blocking of the processes of renewal of the governing bodies of the foundations - underlined Mr. Vingas - contributes to the processes of removal of young people from institutions linked to their own communities, and many voluntary activities "are unfortunately interrupted". In the past, Laki Vingas was for two terms the representative of non-Muslim foundations in the liaison bodies of the entire network of Turkish foundations. These bodies include members of seven non-Muslim faith communities in Turkey: besides the Jews, they are Greek Christians, Armenians, Syrians, Chaldeans, Bulgarians and Georgians. The representative of non-Muslim foundations speaks on behalf of the network of 167 non-Muslim community foundations in Turkey. (GV) (Agenzia Fides, 6/11/2021)

AMERICA/MEXICO - Bishops: “Nothing must distract us from the essential task of education. Peace is possible. Educating to build it is a priority"