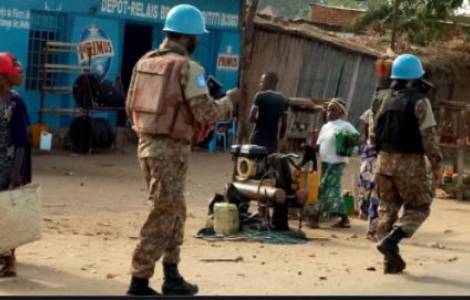 2021-12-28
The work of the White Fathers to stop violence against women, "offering the support of the Gospel"

2021-12-16
Appointment of the National Director of the Pontifical Mission Societies, Fr Celestin Muhindo

2021-11-05
Violence and instability increase in Kivu: a missionary's warning

2021-10-30
Missionary October: first profession of two young people among the Missionaries of the Immaculate Heart of Mary

Kinshasa (Agenzia Fides) - "In the northeastern regions, the situation is dramatic, even worse than a few months ago. The news that is arriving is very bad and we do not see any change. Since May, the state of siege has been proclaimed and, as a result, all political authorities have been removed, in other words, the military is in charge. The number of deaths has increased, the roads are dangerous and impassable on long stretches, cars and trucks are burned or destroyed and kidnappings are increasing. We are informed from Bukavu, that there are incursions of foreign soldiers which add instability to the whole region of North and South Kivu as we know".
This is what Father Gaspare Di Vincenzo, Comboni missionary for four months in Kinshasa, where he is diocesan director of the Pontifical Mission Societies and responsible for missionary animation of the Archdiocese, told Agenzia Fides. After years of serving in the north-eastern regions of the Democratic Republic of Congo, the missionary continues to follow the situation in that tormented region with apprehension.
"We live in a state of permanent insecurity, says Father Di Vincenzo, and I believe that we are now close to the balkanization of the entire Kivu region, which has been talked about for so long. All signs indicate that there will be a partition, on the model of the Balkans. In the meantime, the silence of the president and the whole government on the massacres and the war in Kivu and Ituri is worrying. Not a word, not a statement, not even a day of mourning. And when people continue to remain silent, while occupying such important positions, they become co-responsible. The terrible situation is also complicated by the behavior and role of "MONUSCO", the United Nations intervention force called upon to protect civilians and to play a mediating role. The blue helmets, hated by a large part of the local population due to the inefficiency and lack of timeliness of interventions, were recently accused by a report of an external commission of inquiry appointed by WHO to carry out investigations, for having perpetrated sexual abuse on the civilian population.
The investigation shed light on the period between 2018 and 2020, years in which, in addition to the ongoing conflict, the population also fought against Ebola. But there are many who bet that the abuses have continued in the following months until today. Evidence produced by the investigative body convinced the European Union to temporarily suspend the 20.7 million euros intended for development projects. The missionary notes: "People no longer trust MONUSCO for many reasons. Even with regard to the massacres and violence, they defended themselves by saying that they are in possession of videos taken with drones and that they are ready to provide evidence in the event of a trial. But who can say for sure that the trial will take place? And if so, when? What do they expect, and what other evidence do they need, given that murders and violence take place every day? Even in this thing, we can speak of complicit silence". (LA) (Agenzia Fides, 5/11/2021)

ASIA/VIETNAM - The mission of the Dehonians: "At the service of the Vietnamese people, announcing the Good News"