EUROPE/ITALY - Italian missionaries, people who proclaim Christ with their lives to the whole world 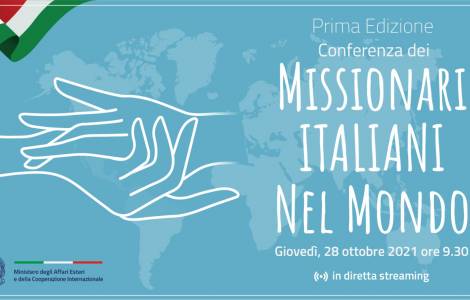 Rome (Agenzia Fides) - There are seven thousand Italian missionaries in the world, of whom about four thousand are consecrated members of religious orders, while the remaining three thousand are lay volunteers.
These are the figures that emerged yesterday during the First Conference of Italian Missionaries in the World held at the Farnesina. The first part was dedicated to greetings and institutional talks, while the second part was marked by the testimonies of the missionaries, most of whom were connected from their respective mission countries.
The gratitude of the Head of State for the work of the Italian missionaries was expressed in a message read at the opening of the conference by the Director General for Italians Abroad and Migration Policies, Luigi Maria Vignali, who moderated the entire morning.
"The mission is knowing how to leave certainties behind to build new ones. In this perspective, we understand even better the theme of the chosen message by the Pope for the 95th World Mission Sunday "We cannot be silent about what we have seen and heard" and he recalls what prompted the apostles and the early Christians to go among the nations and bear witness to what they had seen and heard". The five testimonies of the missionaries were at the heart of the conference; from that of Sister Anna Molinari, daughter of Canossian charity since 1978 who will work from the following year as a missionary in different Australian realities. A complex journey, not without difficulties and moments of discouragement, made up of many different experiences between them: from the service of the Italian communities to the refugees of Africa to the role of General Councilor of the Congregation which led her to travel to the Canossian communities all over the world, from India to Brazil to China. "Being a missionary is not determined by the service we render or by the need we respond to, explains Sister Anna, I understood that for me being a missionary means being with Jesus, serving Jesus, communicating his word everywhere and to all. Father Livio Maggi, from the Pontifical Institute for Foreign Missions, priest since 1994, joined us from Yangon in Asia. Father Maggi, who has also worked in Thailand, is currently in Myanmar working on cooperation projects in the areas of disability, education, social inclusion and agricultural development for New Humanity International. "The mission is a commitment to look at man in his reality and in his needs", explained Father Maggi, who in his speech recalled the work of the many missionaries working in Asia, citing them by name. Father Luca Bergamaschi, who left for the first time in Peru in 1992 as a layman, remaining for two years as a volunteer at the service of the poor and of the various works of charity, became a priest in 2000 and returned to Peru in 2006, first as parish priest of Shilla and now of Chacas. "The missionary is like a pebble in everyone's shoe - said Father Bergamaschi - I thank the poor who allow me to learn to love. To meet them, we too must learn to to go to the peripheries".
Sister Maria Lurdes Lodi Rissini, who belongs to the Congregation of the Missionary Sisters of the Scalabrinians of Saint Charles Borromeo, came from Johannesburg, Africa. From 1998 to 2001, she served in the Philippines, where she founded a school and led an educational project for immigrant children. In 2007 she worked in Spain in social services for the elderly. Since February 2018, she has been working at the Bishops' Conference of South Africa. "I was in charge of a refugee center for women and children from wars. It is a tool that allows women to rediscover their capacity to face poverty, "she said, also referring to her experiences with migrants in the current crisis situation. Finally, for Europe, in liaison from Yerevan, Sister Benedetta Carugati, of the Congregation of Missionaries of Charity of Mother Teresa of Calcutta. Graduated in medicine, she took her vows in 1991 and from 1991 to 1999 she worked as a missionary doctor in Lebanon and from 2000 to 2012 in Jordan. He is currently working in an orphanage for disabled children in the Armenian capital: "Our mission is not to be interested in big political problems or to make big plans, but to meet people and tell them that God is interested in him, in her". (EG) (Agenzia Fides, 29/10/2021)