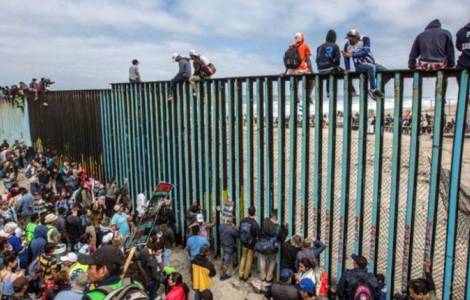 2021-11-15
100 years after the bombing, the extraordinary Jubilee Year inaugurated in the Basilica of Guadalupe

2021-11-11
"Mexico can change for the better!" learning to be "an open, synodal, Samaritan and outgoing Church"

Ciudad Juarez (Agenzia Fides) - "We make a respectful but energetic appeal to the government of Mexico to abandon the repression against migrants and respect its constitutional mandate to make the human rights of all effective. We believe that there are more fraternal paths for human mobility in general, therefore, we continue to reach out to the Government of Mexico, always for the benefit of migrants and the Mexican people, knowing that we believe in a world in which we are sisters and brothers, daughters and children of the same God, without borders, prejudice, hatred or xenophobia". This is the appeal launched to the Mexican authorities during the National Meeting of the Coordinators of the Pastoral Care of Human Mobility and the Directors of the Migrant Homes, within the Mexican Episcopal Conference, signed by Monsignor J. Guadalupe Torres Campos, Bishop of Ciudad Juárez, Responsible for the Episcopal Dimension of the Pastoral Care of Human Mobility.
During the meeting, they reflected on the problems faced by the migrant population, and it was with sadness that the participants noted that "the current migration policy of the Government of Mexico has intensified its actions aimed at containing migratory flows and is moving further and further away from a humanitarian vision of the integral care of people in the context of migration, which has led to violations of the human rights of these people: kidnappings, enforced disappearances, murders, illegal detentions, overcrowding, to name a few". They therefore believe that the government has shirked its responsibility to protect and guarantee the exercise of the human rights of vulnerable people, such as migrants, and has delegated the responsibility of caring for migrants to the Migrant Homes managed by the Catholic Church, "ignoring the mandate to promote and defend the human rights of all people".
Despite appeals from all sides, the Mexican government "has continued its practices of militarization and repression against migrants, which have resulted in multiple human rights violations. "Insisting on finding more humane and non-violent means for the transit of migrants, the participants in the meeting repeated: "We do not want to see more death or pain, we do not want a Mexico where the families of migrants are separated. We do not want a country where municipal, state and federal authorities are complicit in organized crime. We want a fraternal nation, where everyone can live without fear; happy that in this land of pilgrimage we are welcomed by love, hope and charity". (SL) (Agenzia Fides, 16/10/2021)