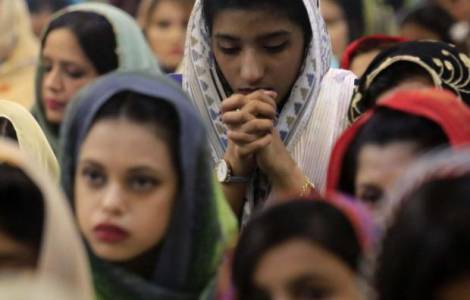 Lahore (Agenzia Fides) - With indignation and a public request for clarification, Christians in Pakistan criticize the rejection of the bill that expressly prohibits the forced conversion of religious minorities. In yesterday's session, October 13, the Parliamentary Commission on Forced Conversions did not accept the bill prepared by the Ministry of Human Rights, which was defined as "non-Islamic" by the Ministry of Religious Affairs and Interreligious Harmony. The bill therefore lapses and will not be submitted to Parliament.
The bill provides for the criminal offense for the forced religious conversion of underage non-Muslim girls in Pakistan. A Pakistani Catholic priest, who asks for anonymity, told Fides: "The act of the Parliamentary Commission is a disgrace". Catholic Michelle Chaudhry, President of the "Cecil & Iris Chaudhry Foundation" (CICF), an organization engaged in civil society, told Fides: "In Pakistan, forced conversion of underage non-Muslim girls is common; belonging to religious minorities, especially Hindus and Christians, are abducted and forcibly converted to Islam; they are then forced to marry their captors who rape them or force them to prostitute themselves. This happens with the utmost impunity".
Chaudhry adds: "All this has to stop: it is up to the state to take urgent and necessary measures. However, we have heard the recent statements made to the Ulema by Prime Minister Imran Khan, that no such law would be enacted during his government. Now the rejection of the bill by the Parliamentary Commission clearly reflects the government's political will not to take care of the safety and protection of non-Muslims in Pakistan".
Chaudhry further stresses: "We intend to fight this serious violation of human rights at all levels. There is an immense need for effective legislation against the forced conversion of underage non-Muslim girls. The state must realize this, as well as uphold its international obligations and the guarantees enshrined in the Constitution of Pakistan".
Christian organizations and churches in Pakistan note that this phenomenon is destroying the lives of hundreds of innocent underage girls, mostly Christians and Hindus, across Pakistan. They therefore consider it essential to have a law which sets a minimum age for conversion and which criminalizes kidnapping and coercion, as well as the forced conversion of minors. In recent days, the Catholic Bishops of Pakistan, on the occasion of the International Day of the Girl, convened by the UN and celebrated on October 11, launched a public appeal to the government, asking it to do everything possible to put an end to the phenomenon of forced marriages, kidnappings and religious conversion of underage girls (see Fides, 11/10/2021).
During the debate in the Parliamentary Commission, Minister for Religious Affairs Noorul Haq Qadri said that "the environment is unfavorable" for the formulation of a law against forced conversions, saying that the enactment of a law on forced conversions "would deteriorate the peace in the Country and create further problems for minorities", while some senators said that "laws contrary to Islam cannot be enacted in Pakistan". (PA) (Agenzia Fides, 14/10/2021)

AFRICA/SUDAN - The commitment of Comboni missionaries: helping refugee minors from South Sudan to return to school

AFRICA/EGYPT - Patriarch Tawadros: “Exclusive priesthood for men is based on the desire of Christ”