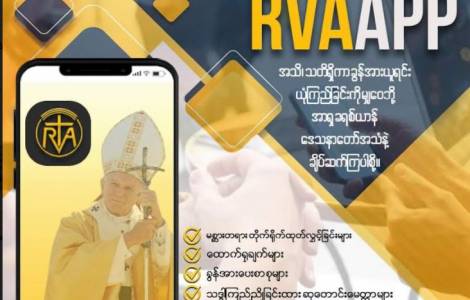 Yangon (Agenzia Fides) - It is an instrument for spreading the Good News of the Kingdom of God and for sowing hope: with these words Cardinal Charles Maung Bo, Archbishop of Yangon and President of the Federation of Asian Bishops' Conferences (FABC) officially presented the new Mobile App of Radio Veritas Asia (RVA), in a launch ceremony held at St. Mary’s Cathedral in Yangon on October 11. As Fides learned, Cardinal Charles Bo said he was very happy with this further progress of RVA in the field of digital media. "Like Saint Paul, we are called to preach the Gospel. May RVA truly become the missionary of Asia, the voice of Asian Christianity", said Cardinal Bo during the Mass celebrated in the cathedral. "The new Application is designed for all people who believe in God and can have constant moral and spiritual support from Radio Veritas", he said, encouraging bishops, priests, religious and lay people in Myanmar across Asia "to use it for prayer, for formation, for catechesis". "This application is useful for priests and religious, in their pastoral service to our people and in preaching. It is useful for people to be constantly connected with the Word of God", he remarked. Radio Veritas, recalled the Cardinal - brings the Good News of the Gospel to Myanmar by broadcasting in different languages spoken in the nation: Burmese, Hakha chin, Tedim chin, Falam chin, Zo chin, Jighpaw kachin, Rawan kachin, Lisu kachin, Sakaw Karen, Poh Karen, Tamil, Mandarin Chinese.
Fr. Feroz Fernandes, SFX, editor-in-chief at RVA; stated that "this is an application that raises awareness in sharing our faith". As explained by Fr. Victor Sadaya CMF, Director of Radio Veritas in Manila, the broadcaster "is enhancing the evangelization service by broadcasting in 21 Asian languages. With this App, the public can easily access RVA services in their chosen language". Radio Veritas Asia (RVA) was founded by the FABC in 1969 to spread the good news of the salvation of Jesus to the peoples of Asia and to promote communication between the peoples of Asia.
Broadcasting shortwave radio programs was used until 2015. With the spread of digital mass media, the FABC has transferred broadcasts to the Internet since 2015 and has now also created the App for mobile devices. (JZ-PA) (Agenzia Fides, 12/10/2021)