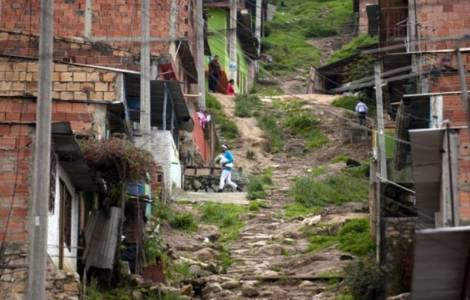 2022-11-26
Bearing witness to Jesus Christ on a daily basis: the experience of a "family on mission" in the Apostolic Vicariate of Puerto Ayacucho

2022-10-06
Month of the Bible: walking together on the rock of the Word of God to announce the love of Jesus

Caracas (Agenzia Fides) - In the last year, extreme poverty has increased in Venezuela by more than 8%, formal employment has lost 1.3 million jobs and educational coverage has decreased by 5%. These are the data collected by the Economic and Social Research Institute (IIES) of the Catholic University Andrés Bello (UCAB), for the national survey on living conditions (ENCOVI) of the year 2021, carried out between February and March, in 22 states, interviewing 17,402 families.
According to the note sent to Fides, the study notes that poverty in Venezuela remains at "the highest possible levels, of 94.5%", while extreme poverty continues to grow and covers two thirds of the country's families, 76,6%, an increase of 8.9 points, from 67.7% last year. In the presentation of the study, uploaded on YouTube and Zoom, the rector of UCAB, Fr. Francisco José Virtuoso, sj, noted "with great concern, that the State and political sectors pay little attention to these studies ... Nor do we see that international cooperation organizations, beyond their interest in knowing these figures, take advantage of this input to make their work more effective". In view of the upcoming elections in November, Fr. Virtuoso hopes that this data will be evaluated by the candidates to review their action plans, and has invited citizens to know this information and make use of it. "We also hope that voters will ask those who propose themselves as candidates for lines of action in order to face the serious challenges presented in this study", he stressed.
For Professor Luis Pedro España, the factors that have most influenced the quality of life of Venezuelans in the last year have been the fuel crisis and preventive measures against Covid-19. The combination of these two factors has led "half of Venezuelans of productive age to be thrown into inactivity and those who continue to work do so in much more precarious conditions than in previous years". "Extreme poverty continues to cover two thirds of the country's families", said the expert, and in the last year the number of families in multidimensional poverty - that is, deprived or deteriorated in conditions such as education, housing, access to public services, income and employment - went from 64.8% to 65.2%, which is an increase of 0.4 percentage points. Although the percentage seems low, between the first ENCOVI in 2014 and that of this year - less than a decade - families who entered a condition of multidimensional poverty increased by 25.9 percentage points, from 39.3% to 65.2%. Another aspect highlighted by the Professor concerns inequality: Venezuela is in fact the most unequal country in America, "since 10% of the people with the best income concentrate 40% of all national income". However, he explained, the problem right now is not inequality, but production. "If this country does not produce, we will continue to be poor. For this to happen, there must be important changes so that trust is generated, that there are investments, certainties, that there are reliable institutions. A series of changes must take place that today do not seem to be underway".
Professor Anitza Freitez, Demografa, coordinator of the ENCOVI Project, highlighted the consequences of the closure of educational centers due to the pandemic, and the negative effects this has caused on educational coverage at all ages, especially in early and university education. Between the period 2019-2020 and 2021, global education coverage (for people aged 3 to 24) fell by 5 percentage points, from 70% to 65%, and compared to 2014 (coverage of 73%) the drop is 8 percentage points. Social inequalities in learning processes have also been widened, due to the adoption of distance education without providing the necessary support to teachers and students, as well as to families so that they can carry out the required accompaniment. Another aspect addressed by the study is that of recent migrations. Most of those who have left Venezuela, about 5 million, are men; almost half are young people aged 15 to 29, 90% if we consider the age group between 15 and 49; the main reason for emigration remains the need to look for work in another country (86%), the second reason, which is increasing, corresponds to family reunification. Recent migration spans the entire social spectrum. Two out of three migrants have a regular status, because they have acquired the citizenship of another country (12%), have a permanent residence permit (16%) or a temporary permit (33%). Three out of five send aid in cash or in kind to their home country, in 57% of cases once or twice a month. Professor Freitez noted that "despite the pandemic, the percentage of returnees is quite small: the return of migrants to the country reaches only 5% of those who have left". (SL) (Agenzia Fides, 1/10/2021 )

ASIA/SINGAPORE - Archdiocese is again offering services during the lunch break