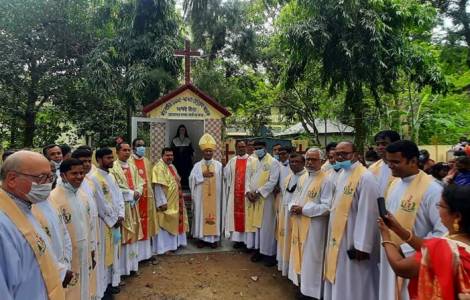 Rajshahi (Agenzia Fides) - The faithful of the diocese of Rajshahi, in northwestern Bangladesh, celebrate the centenary of the arrival of the faith in their territory, which took place thanks to the migration of the Christian population from Gazipur (near Dhaka) to the north of Bangladesh. In fact, starting from 1920, many Bangladeshi Christians began to migrate from the areas of Gazipur and Bhawal, in the archdiocese of Dhaka, to the districts of Pabna and Rajshahi, in the north, in search of land to improve their economic condition. The annals recall Paul Gomes, the first Christian who moved from the village of Bagdi, in the parish of Nagari in Gazipur, to the village of Utholy village in Pabna, in northern Bangladesh, in 1920. The man found a job as a cook at the home of a Baptist Pastor, who asked him for help to hunt the wild pigs that destroyed crops and rice fields. Gomes was an experienced hunter. At that time, according to a popular social practice, a "zemindar" (landlord) offered plots of land as a gift in exchange for hunting those animals. Gomes began hunting pigs and obtained a lot of land and started a prosperous life in that area. When he returned to his parish of Nagari, in Gazipur, he shared with the local inhabitants the immense opportunity to acquire land and crops in Pabna. At that time, the local people suffered from a lack of food. Thus began the migration of numerous families to the North, who also brought their Catholic faith and culture. Over 15,000 faithful moved from Gazipur to Rajshahi. In the following years, for their pastoral accompaniment, the Church created the diocese of Rajshahi (canonically erected in 1990), where today a thriving Catholic community of about 20 thousand faithful lives.
In Rajshahi in recent days more than a thousand Bangladeshi Catholics celebrated the Jubilee of the hundred years since that migratory flow brought the seed of the Gospel with it. Bishop Gervas Rozario, today at the head of the diocese of Rajshahi, presided the mass in the parish of Mothurapur to celebrate the centenary of the migration. His parents were among those who moved from Gazipur a hundred years ago. The Bishop recalled: "God's plan was to move my family to Northern Bangladesh. When our parents came here, they saw a dream, which is that we children could be self-sufficient and receive adequate education. Although they were not educated, they organized education for us. Like so many others, they were farmers and day laborers, but they tried to give their children a good education".
The Bishop also expressed gratitude to the foreign missionaries who have served in this area as spiritual and pastoral guides, accompanying the growth of faith in the community. "The missionaries of the Pontifical Institute for Foreign Missions (PIME) served those who moved from Gazipur to northern Bangladesh. We are grateful to them and pray for them. Without their pastoral accompaniment and their help in the path of formation, today we would not be here". In Northern Bangladesh, 100 years ago, the Italian priests of PIME began the work of evangelization and pastoral service in areas mostly inhabited by tribal populations. Thanks to their pastoral care, six parishes were gradually established in Bonpara (1940), Mothurapur (1947), Borni (1949), Foilzana (2007), Gopalpur (2008) and Bhabanipur (2011). Bishop Gervas Rozario noted that his parents' dream has come true: "Now families are self-sufficient" but, he added, "our parishes are not yet self-sufficient", inviting the faithful to feel co-responsible for the pastoral life of the Church. The Bishop then warned against the new modern migrations: "Our faithful should not think about moving to Dhaka or even abroad in search of a better future. We are called to do our best to build a just and thriving society here, so that everyone can live a life of dignity, as children of God". (FC-PA) (Agenzia Fides, 27/9/2021)