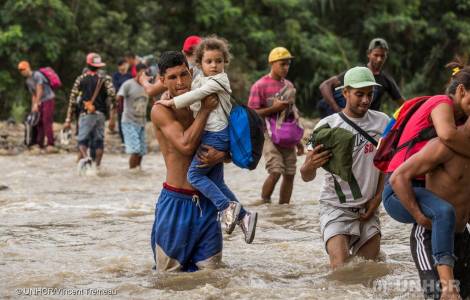 2021-10-23
Sandra Sabattini, a young woman who loved the poor for the love of God, will be beatified on World Mission Sunday

Rome (Agenzia Fides) - The international conference "Migrants and pilgrims, like all our fathers" (cfr. 1 Cr 29, 15) was held from September, 20 to 22 - "Theology of human mobility in the 21st century", promoted and organized by the International Union of Superiors General (UISG), the Union of Superiors General (USG) and the Scalabrini International Migration Institute (SIMI).
The event, which included group work sessions, was attended by more than 250 members belonging to about 70 religious congregations operating all over the world. The goal, as the note sent to Fides informs, was to face together with the local Churches of the countries of departure, transit and reception, the challenges posed by migration. The speakers (academics, scholars, theologians and international theologians, and pastoral workers) presented and discussed the state of their research, aimed at responding to the reality of current migratory movements through reflection open to action.
Cardinal Joao Braz de Aviz, Prefect of the Congregation for Institutes of Consecrated Life and Societies of Apostolic Life, opened the meeting who, after reciting the prayer for the World Day of Migrants and Refugees, which is celebrated on Sunday, September 26, recalled how "combining biblical theological and pastoral reflection with the action of consecrated persons in favor of migrants" is "a concrete testimony that indicates a style to follow". Not only is it a style to follow, but taking care of our sisters and brothers forced to flee "is an inevitable responsibility. Because we are all migrants and the land belongs to God", Cardinal Silvano Maria Tomasi recalled.
Among the speeches that opened the works, there were also those of Fr. Fabio Baggio, Scalabrinian and Undersecretary of the Migrants and Refugees Section of the Dicastery for the Promotion of Integral Human Development and of Fr. Leonir Chiarello, Superior General of the Scalabrinian Missionaries. "To do pastoral theology today one must know how to pitch a tent among the people of God. In particular, as Pope Francis recalls, one must know how to pitch a tent among the inhabitants of the existential peripheries; this allows us to listen to the people of God, to read together the signs of the times and above all to learn the meaning of the faith of the faithful", said Fr. Baggio. This process must be accompanied by a "systematic study" given "the complexity and speed of changes as well as the extent of the actors involved in the migration phenomenon, who are migrants, refugees, displaced persons, seafarers, and all those who, in one way or another, experience a form of uprooting", underlined Fr. Leonir Chiarello.
Many good practices at a local level were shared that deepened both the reality of the migration path - often forced and due to conflicts, persecutions, serious economic and development imbalances, climate change in progress - as well as the commitment to the physical healing process, psychological, and spiritual of this "large community of migrants, among whom there is the most vulnerable group of refugees, of those camped in large refugee camps, of victims of trafficking, of children and adults; who are our pain and a wound that we have as humanity" and on which we must "reflect to nourish and enlighten our consciences and consciences in our communities, of the Church and of society", said Sister Jolanta Kafka, President of the UISG.
"Let's not forget - said Fr. John Larsen, USG delegate representative - that it is in our DNA as 'people of the Book' to have a passion for the ministry of migrants".
What emerged in these days of reflection and dialogue are “paths for action”, concludes Fr. Aldo Skoda, Director of SIMI. "Today, more than ever, migration is a phenomenon that challenges society and the Church. It is appropriate to keep in mind, in addition to numbers and statistics, the human face of those, children, men and women, who have left everything behind them. This the Church has always taken on the burden of suffering, but also of the hopes of men and women of different eras and cultures. An important reference certainly remains the action and teaching of Pope Francis as the challenge is not only what pastoral action for and with migrants we want to carry out, but also what face of society and of the Church we want to build together, for an 'always bigger' us, which is also the message of the World Day of Migrants and Refugees that we will celebrate next Sunday".
The plenary sessions of the event are available on the UISG YouTube channel. (SL) (Agenzia Fides, 23/9/2021)