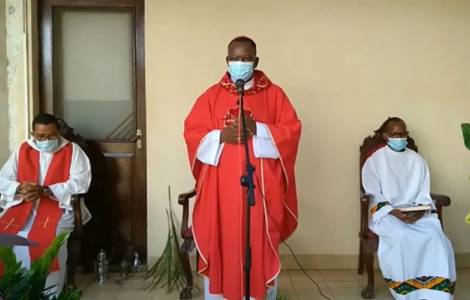 Maputo (Agenzia Fides) - "Security is still precarious. The first thing we really need to do is ensure that people can return safely to resume their lives with confidence. But I think we still need time", says His Exc. Mgr. António Juliasse Ferreira Sandramo, Apostolic Administrator of Pemba, capital of the province of Cabo Delgado, in northern Mozambique, devastated in 2017 by violence committed by jihadist groups. Since July, an offensive by government troops, with the support of Rwanda and the Southern African Development Community (SADC), has helped strengthen security and recover several areas where there was a rebel presence, including the city of Mocímboa da Praia, which has been occupied since August 2020. The problem now is the return of displaced people to their homes. "If people return, we will also consider the possibility that missionaries will return. But for us, the thermometer will be to understand the degree of real security", emphasizes Mgr. Juliasse. Among other things, the question of who destroyed a church in Mocímboa da Praia remains unresolved. Mgr. Juliasse says: "The destruction came from above, from the helicopter bombings. Both in Muidumbe and Mocímboa da Praia. The question is the same: who destroyed the Church?". In July, the director of the Commission for Migrants, Refugees and Displaced Persons (CEMIRDE) of the Mozambican Bishops' Conference, Sister Marines Biasibetti, said some 900,000 people were internally displaced in Cabo Delgado and in surrounding provinces such as Niassa, Zambezia and Nampula. Half of them are children. Mgr. Juliasse acknowledges that thanks to the efforts of the military several areas have been reconquered from the insurgents "but there is still no guarantee of security, that those areas are really safe".
Mgr. Juliasse also underlines that the Church works in close collaboration with various United Nations agencies to provide humanitarian support to the displaced people, mainly through the provision of food and medicine, but also through psychological assistance and the distribution of seeds and agricultural tools so that people can produce their own food. Yesterday, September 21, the government of Maputo approved a plan for the reconstruction of Cabo Delgado, which will run from 2021 to 2024. (L.M.) (Agenzia Fides, 22/9/2021)

EUROPE/UKRAINE - Welcoming and supporting others, against the horror of war