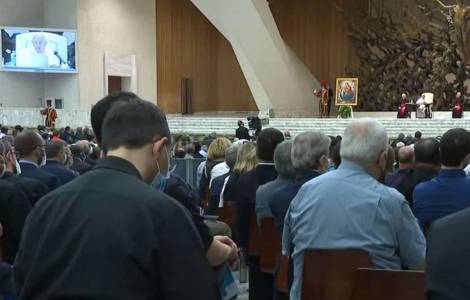 2021-09-18
Pope Francis to the Church of Rome: Mission is the work of the Holy Spirit, beware of the risks of a "do-it-yourself" Church

Rome (Agenzia Fides) - The Church is by nature synodal, and fulfills her mission only if she obediently follows the actual and effective action of the Holy Spirit, as we read in the Acts of the Apostles. It is only in this way that one can overcome "the temptation to do it alone", and to "take God's place, claiming to model the Church on one's own cultural convictions". As if, "having ascended into heaven, the Lord had left a void to be filled". This is what Pope Francis said today, speaking on the morning of Saturday 18 September to the participants in the Convention of the diocese of Rome. In his long speech, the Bishop of Rome once again indicated the Acts of the Apostles as a paradigmatic text to which we must refer in order to recognize the sources and the proper nature of the mission to which the ecclesial community is called, escaping from the eternal temptation to build a "do-it-yourself" Church and even reduce synodal meetings to a "diocesan Parliament".
The Pope's speech began with the "Synodal Journey" which involves the whole Church in view of the Assembly of the Synod of Bishops in 2023. During this journey - the Pontiff remarked - "It is not a question of collecting opinions, this is not an investigation, but to listen to the Holy Spirit". The theme of synodality - the Pope said - is not a chapter in a treatise on ecclesiology, much less about fashion", since synodality "expresses the nature of the Church, her form, style, mission". This is attested by the Acts of the Apostles, which the Pope defined as "the first and most important manual of ecclesiology". A 'common journey' (this is what the word 'Synod' means) which is accomplished by following the works of the Holy Spirit, open to its surprises, witnesses of an impulse that puts the Apostles themselves "in crisis, that pushed them to dare, ask, change their mind, make mistakes and learn from mistakes, especially hope despite difficulties".
It is the Holy Spirit - the Pope continued - which "made them discover the geography of divine salvation, opening doors and windows, tearing down walls, breaking chains, freeing borders. At that point it may be necessary to leave, change course, overcome beliefs that hold back and prevent us from moving and walking together".
It is always the work of the Holy Spirit which in the first community created harmony in the "confrontation between different visions and expectations. We must not fear - the Bishop of Rome remarked - that this will still happen today. These are signs of docility and openness to the Spirit. There can also be clashes that reach dramatic heights, as was the case with the problem of the circumcision of pagans, until the deliberation of what we call the Council of Jerusalem". In that first Council of the Apostolic Church - the Pope recalled - "there was a long discussion. It was a question of recognizing the freedom of the action of God, and that there were no obstacles which could prevent it from reaching the hearts of people, whatever their moral or religious background". This synod concluded with a message which still represents the most effective definition of the "protagonism" of the Holy Spirit in the real dynamics of the life of the Church: It is the decision of the holy Spirit and of us not to place on you any burden beyond these necessities" (Acts 15:28). Without the Spirit, the Bishop of Rome observed in one of the additions made to the written text - even the Synod ends up by being reduced to a "diocesan Parliament". In reality - the Pope continued - "it is only when the Church bears witness, in word and in deed, of God's unconditional love, of her hospitable breadth, that she truly express her own catholicity. The impulse and the capacity come from the Spirit". A synodal journey made in the wake of and in the company of the Holy Spirit - noted the Successor of Peter, returning to the question at the center of his speech - is recognizable because it is marked by listening "to the totality of the baptized, because all are depositaries of the sensus fidei". There is a lot of resistance "to overcome the image of a Church rigidly divided between leaders and subordinates, between those who teach and those who must learn, forgetting that God likes to overturn positions", and that "in the history of salvation, we are all sheep with respect to the Shepherd who is the Lord".
Exercising sensus fidei - the Pope clarified - "cannot be reduced to expressing and comparing opinions that we can have regarding this or that topic", or to the idea "of differentiating majorities and minorities, this is what Parliament does".
Above all, the sensus fidei will guide the synodal journey to recognize and concretely affirm Christ's predilection for the poor and to eliminate any elitist and exclusivist reduction of belonging to the people of God. Such belonging - Pope Francis clarified - is not "a privilege", but "a gift that someone receives for all, that we have received for others", to order to "bear witness in deeds and not just in words to the wonders of God, which, if known, help people to discover his existence and accept his salvation".
Even the concrete modalities of carrying out the synodal journey must avoid the temptation to conceive and present parishes, movements and ecclesial communities as if they were exclusive clubs: "I recommend" suggested the Bishop of Rome "leave doors and windows open, do not limit yourselves to considering only those who attend or think like you. Allow yourselves to go out to meet and allow yourselves to be questioned, let their questions be your questions, allow people to walk together: the Spirit shall lead you". The people of Rome themselves - noted the Successor of Peter in the concluding part of his speech - "contains the variety of all peoples and of all conditions" (GV) (Agenzia Fides, 18/9/2021)