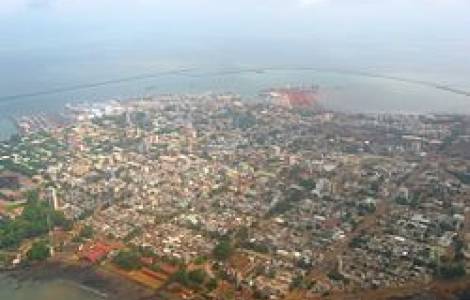 2021-09-06
Coup: "Calm situation in Conakry; waiting for the meeting between the coup leaders and the deposed ministers"

Conakry (Agenzia Fides) - The leaders of the Economic Community of West African States (CEDEAO/ECOWAS) suspended Guinea from their regional organization after the military coup on Sunday, September 5 (see Fides, 6/9/2021), but they abstained from economic measures pending the sending of a diplomatic mission. "The Conference expresses its deep concern for the political developments that have taken place in the Republic of Guinea following the coup d'état of September 5, 2021 and for their consequences on regional peace and stability and condemns, with the utmost force, the military coup", they say in a statement released yesterday, September 8.
"The Conference calls for the physical integrity of President Alpha Condé to be respected and for his immediate and unconditional release, as well as that of all arrested personalities", the statement said. Pending the sending, scheduled for today, September 9, of a high-level mission in Conakry, no economic sanctions are currently envisaged, unlike what happened with the August 2020 coup in Mali.
The military coup took place after at least a year of deep tensions in the country. On August 15, 2020, in the homily of the Mass for the Solemnity of the Assumption of Mary, His Exc. Mgr. Vincent Coulibaly, Archbishop of Conakry, urged political leaders to "put an end to all violence and start an inclusive dialogue" (see Fides, 25/8/2020). Mgr. Coulibaly had asked "the government and socio-political actors to immediately cease all forms of violence and to establish the conditions for an inclusive dialogue in favor of peace, to allow the parties in conflict to listen to each other and exchange their points of view in order to find peaceful solutions to the national crisis". Tensions in the ountry had increased in view of the presidential elections held on October 18, won by the outgoing President, Alpha Condé, who had obtained a controversial third term made possible by the constitutional referendum that abolished the two-term limit.
At the beginning of June, during his stay in Guinea, Cardinal Robert Sarah, former Archbishop of Conakry and former Prefect of the Congregation for Divine Worship and the Discipline of the Sacraments, met with President Alpha Condé and his opponent, Cellou Dalein Diallo. The latter had confided that he had spoken with Cardinal Sarah about the socio-political situation prevailing in Guinea. "I was able to give him my interpretation of the crisis our Country is going through", he explained in an interview. This crisis is, in my opinion, first of all a crisis of confidence aggravated by a chronic deficit of morality and probity of the socio-political actors". (L.M.) (Agenzia Fides, 9/9/2021)