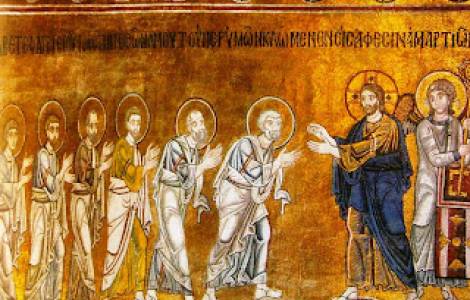 2021-09-13
Pope Francis in Budapest: the Eucharist frees us from false messianisms

2021-09-08
Russian Metropolitan Hilarion: Orthodox and Catholics share the same faith in the real presence of Christ in the Eucharist

Budapest (Agenzia Fides) - Catholics and Orthodox cannot ordinarily share the sacrament of the Eucharist, because they do not live in full ecclesial communion. But certainly, both Catholics and Orthodox recognize that "in the Eucharistic bread and wine, after their consecration, we have not only the symbolic presence of Christ, but his full and real presence". With these words, full of potential pastoral implications and for the life of many ecclesial communities around the world, Russian Metropolitan Hilarion of Volokolamsk, President of the Department for External Ecclesiastical Relations of the Patriarchate of Moscow, confessed and reaffirmed the shared faith of Catholic and Orthodox Christians in the real presence of Christ in the Eucharist. This is what he said in his speech on Monday, September 6, during the works of the 52nd International Eucharistic Congress that is taking place in Budapest, an ecclesial event that will end on Sunday, September 12, with the celebration of the Eucharistic liturgy presided over by Pope Francis.
Catholics as well as Orthodox - remarked the authoritative exponent of the Russian Orthodox Church - "believe that the bread and wine of the Eucharist is the true body and blood of our Lord Jesus Christ". For Catholics and Orthodox, the Eucharistic celebration "is not only a commemoration of the Last Supper, but also its actualization for every believer who participates in it", and the celebrant "does not work in the Eucharist on his own behalf. It is in the name of Jesus. Christ himself who utters the words originally pronounced by Christ in his Last Supper. And it is Christ himself who administers the sacrament to those who follow him, not a priest or a bishop". Referring to the representation of the Eucharist in Orthodox art, Metropolitan Hilarion - it is noted in a statement released by the Patriarchate of Moscow - "particularly dwelt on the traditional iconography of the 'Communion of the Apostles', and described it as an eloquent expression of faith in the Eucharist as a force that builds the unity of the Church".
It should be remembered that Ioannis Zizioulas, Metropolitan of Pergamum (Ecumenical Patriarchate of Constantinople), recognized by many as the greatest living Christian theologian, in his Eucharistic theology indicated precisely the Eucharist as the source of the unity of the Church, an effective work of divine grace which alone can recompose full sacramental communion between Churches and ecclesial communities, healing the wounds which throughout history have divided those who bear the name of Christ. In an interview, released to the monthly 30Giorni in the summer of 2005, Metropolitan Ioannis of Pergamum reiterated the axiom formulated by Russian theologian Nicolai Afanassieff, according to whom "where there is the Eucharist, there is the Church". "This means" Zizioulas commented at the time "that every local Church where the Eucharist is celebrated should be considered as the full and Catholic Church". (GV) (Agenzia Fides, 8/9/2021)

ASIA/MIDDLE EAST - Patriarch emeritus Michel Sabbah: "The future of Christians in the Middle East is not a question of numbers, but of faith"