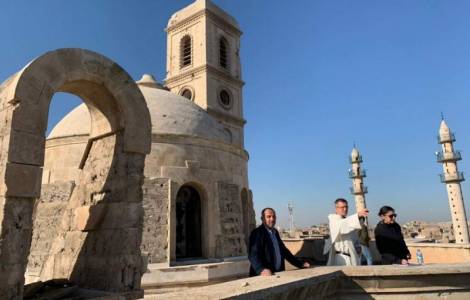 Mosul (Agenzia Fides) - The appointment is set for Tuesday September 14, the day on which the Exaltation of the Holy Cross is celebrated, a solemnity particularly dear to the Christian communities present in Iraq. On that day, the bell of the historic "Church of the Hour", officiated by the Dominican Fathers, will return to ring again in the streets and squares of the old city of Mosul. These will be the first bells to be heard on the right side of the city crossed by the Euphrates since the days when Mosul fell into the hands of the jihadists, to become the Iraqi capital of the self-proclaimed Islamic State (Daesh) from 2014 to 2017. Thus, after the years of jihadist occupation, the social coexistence of the city will once again be accompanied by one of the simplest and most discreet signs with which the Christian presence is made perceptible to all, as the days pass. Our Lady of the Hour (Al-Saa'a) is located in the heart of Mosul, at the intersection of the two main roads that cross the old city. Built at the end of the 19th century, it has always been considered one of the symbols of Mosul, especially for its highly visible bell tower which, with its large clock, was donated to the church by Empress Eugenia, wife of Napoleon III. The church, historically officiated by the Dominican Fathers, had been severely damaged (but not destroyed, as some media prone to deceptive sensationalism claimed at the time) during the jihadist occupation. The restoration of the sacred building, as already reported by Agenzia Fides (see Fides, 2/8/2019), had been included in the restoration plan of churches and monasteries devastated during the period of jihadist occupation. A reconstruction program launched thanks to the contribution of the European Union, international bodies such as UNESCO (supported in the realization of this project by funding from the United Arab Emirates) and foreign institutions such as the Department of Heritage and Civilization of the University of Pennsylvania. In April 2020, a UNESCO press release highlighted the interest of the project, which provides job opportunities to local craftsmen, professionals and workers (at a time when the unemployment rate has increased dramatically, partly because of the pandemic) and to encourage the reconstruction of the multi-ethnic and multi-religious social fabric that once characterized the Iraqi metropolis.
The Dominican Church in Mosul is the heir of a very long tradition. The Order of Preachers had in fact arrived in Mesopotamia as early as the 13th century and had established its own convent in Mosul as well. After the defeat of the Crusader kingdom in Acre (1291), the Dominicans present in Mosul were martyred. In 1750, Pope Benedict XIV sent the Dominicans back to Mosul.
"The chimes of the clock of this church", Sister Luigina Sako, Superior of the Roman house of the Chaldean Sisters Daughters of Mary (and sister of the Chaldean Patriarch Louis Raphael) told Agenzia Fides in April 2016, "marked our youth, when Mosul was a city where people lived together in peace. I remember that as students, when we had an important exam, we all went, Christians and Muslims, to bring a piece of paper with our requests for help to the grotto of Lourdes located in this church, which even our Muslim friends knew and honored as 'the church of the miraculous Madonna' ". (GV) (Agenzia Fides, 4/9/2021)