AMERICA/HAITI - Three weeks after the earthquake, help is still urgent; wave of solidarity among Haitian Catholics 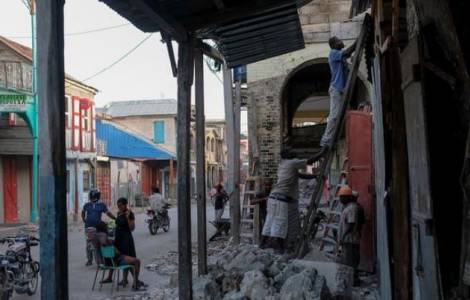 2021-12-11
"Believing in life and becoming multipliers of goodness and hope", the Camillians strengthen their missionary commitment

2021-10-28
"Our commitment continues unabated": the Camillians help the population between criticisms and some positive notes

Port au Prince (Agenzia Fides) - Three weeks after the terrible earthquake that struck Haiti on August 14, which caused more than 2,000 deaths and hundreds of injured, the population continues to suffer from a lack of assistance and aid. Access to basic needs is not yet guaranteed and, among the damage reported, several churches have also been destroyed or seriously damaged.
"So far we have not received any tents. People are sleeping on the ground. There is no water, electricity, food, clothes", Cardinal Chibly Langlois, Bishop of the diocese of Les Cayes told the local press two days ago, adding: "By a miracle, we escaped unscathed, but many people lost their lives, including Father Jacques Percy, a retired diocesan priest". The Cardinal himself was injured in the earthquake. According to a first partial assessment, the diocese of Cayes has so far recorded 682 dead, 2,175 injured, some 11,500 houses damaged and 111 churches destroyed. In the Diocese of Jeremiah, 26 churches suffered significant damage, including Saint-Louis Cathedral, while 11 collapsed. Father Renold Antoine, C.Ss.R, Redemptorist Missionary, informs Agenzia Fides of a particular initiative. "In the absence of a good coordination of the distribution of aid by the national government and given the impossibility of reaching the most remote places that were devastated by the earthquake of August 14, the Catholic faithful of the Metropolitan Archdiocese of Port-au-Prince are organizing to come to the aid of the victims in southern Haiti. In recent weeks, in the Redemptorist parish of San Gerardo, there has been an out of the ordinary wave of solidarity from parishioners to share what little they have with those who have lost everything, and needs our help in these difficult times".
"The young people of the different youth groups in the parish are involved in the preparation of food bags – explains the missionary -. This demonstration of solidarity and generosity is an implementation of the words of Jesus in the Gospel: ... I was hungry and you gave me to eat; I was thirsty and you gave me to drink; I was a stranger and you welcomed me. I was naked and you clothed me, I was sick and you healed me (cf. Mt 25: 35-36)".
Father Renold Antoine thanks all those who take part in this campaign to collect non-perishable foodstuffs, hygiene items, clothes in good condition, blankets and sheets: "May this outpouring of generosity be contagious and reach all areas of the country, so that we can unite as one people, to save our common boat, which is Haiti. May our Mother of Perpetual Help, the Patroness of Haiti, intercede for us, so that we can continue walking together to reconcile the nation with itself and look to the future with hope!". (CE) (Agenzia Fides, 4/9/2021)

AMERICA/BRAZIL - Petropolis launches urgent call for help after the storm