AFRICA/GHANA - The Bishop of Wa: "Let's not isolate the mentally disabled" 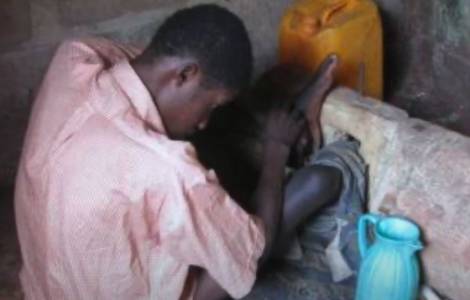 2022-08-01
Bishops' appeal: "Do your utmost to end insecurity on the African continent"

2022-07-04
Education, health and care for the environment among the priorities of the missionaries in Keniago

2022-06-03
Resignation and appointment of bishop of Yendi

Wa (Agenzia Fides) - “In December 2020, while I was distributing meals together with the volunteers, I met Agostino and Mary. Agostino, lived on the street, used cocaine and alcohol. . Mary, married and mother of three, was lost in the city and could not remember where she came from. These are situations which, like so many others, do not leave much hope. But thanks to the volunteers who met them every week, a bond of trust was created". This is what Mgr. Richard Kuuia Baawobr, Bishop of Wa, Ghana, reports to Fides, speaking of the project he launched in 2016 in favor of people suffering from psychiatric disorders. "The initiative, launched in the authentic spirit of Christian charity, is finally bearing its first fruits - says Msgr. Richard - and who wants to go further, by creating modern treatment structures and by fighting against social stigmatization".
According to the latest data provided by the World Health Organization, out of a population of 31 million, about 700,000 people suffer from a serious mental disorder, while another 2 million people are affected by a moderate or mild mental disorder. Mental health services are present only in large cities. "These are hospitals that have an outdated approach to mental illness - explains the Bishop. Many international organizations in fact advise against the creation of large centers because of the risk that individual patients will not receive the necessary attention, and instead advocate the creation of small centers distributed throughout the territory". "To this is added the stigma of which mentally handicapped people are victims: "Many are far from their family of origin - observes Mgr. Richard - and are often mistreated, isolated and harassed. In order to respond, in the spirit of the Gospel, to the needs of these vulnerable and "discarded" people, Mgr. Richard launched in 2016 a project involving parishes, religious organizations, religious and lay people. Groups of volunteers started bringing food and clothes to the mentally ill living on the streets. Doctors and nurses were also available to provide treatment and medication. Thanks to the donations received", reports Mgr Baaworb, "we are building a rehabilitation center where the sick living in the street can be accommodated. They can receive the necessary treatment there and undergo a process of rehabilitation and reintegration in their community of origin. In February 2020, the work of the Assistance Center began: "The rainy season, the confinement due to the Covid, specifies the Prelate, slowed down and sometimes interrupted the construction of the building". In particular, he points out, "it is necessary to build the kitchen and the dormitory, both to ensure the stability of the meal supply and to guarantee overnight accommodation, but also because due to the high costs due to land reclamation, the purchase of material, the costs of renting vehicles and personal. This structure - he continues - could serve not only the north of the country, but could also benefit and accommodate patients from nearby Burkina Faso". The project plans to involve the Ghanaian health services, which should provide the drugs and counseling necessary for patients to return to normalcy. "It is important that everyone works together - concludes the Bishop - to educate the public about mental health and the need for families, communities and society to accept illness and help patients during and after treatment". (ES) (Agenzia Fides, 4/9/2021)