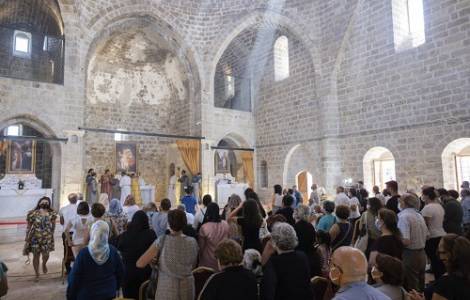 Malatya (Agenzia Fides) The Armenian Apostolic Church of Surp Yerrortutyun (Holy Trinity), in the eastern Turkish province of Malatya, has reopened its doors to divine worship after an interruption of 106 years. The divine liturgy, celebrated in the church on Sunday, August 29, was presided over by Sahak Maşalyan, current Armenian Patriarch of Constantinople, and was attended by a large number of Armenian Christians residing in the region. The day before, Saturday, August 28, the building had been reopened as a "Cultural Center of Art and Tashhoran Culture". The architectural work, whose construction had been completed in 1893, was in a state of decay after decades of total abandonment. The last liturgical celebration took place there in 1915, when the place of worship was under the jurisdiction of the Armenian Patriarchate of Constantinople, and before Anatolia became the scene of the deportations and massacres known as the "Armenian Genocide".
The restoration of the church - reports the bilingual Armenian-Turkish newspaper Agos – was promoted by the local Hayder association. Local political authorities, present at the inauguration, explained that the architectural complex is being reopened to the public as a cultural center. At the same time, upon request, local Armenian Christian communities will be able to use the church for ecclesial initiatives, baptisms and weddings, prayer meetings and divine liturgies. "The church, restored 100 years later as an artistic and cultural center" declared Patriarch Maşalyan in the speech given during the inaugural celebrations, "also opens to Christian citizens for worship. Of course, we take this as a very important message in terms of peace, unity and brotherhood for this country".
In recent times (see Fides, 23/1/2021 and 27/1/2021) the fate of ancient Christian places of worship reduced to a state of abandonment that had been put up for sale by private owners or had even been dismantled in order to free up land for the benefit of new building and real estate initiatives had caused disappointment. Even the Armenian Orthodox Patriarchate of Constantinople had issued a statement on the matter, expressing regret that "ecclesiastical buildings are perceived as a commercial good and are seen by some as a source of income". In the past - the declaration of the Armenian Patriarchate based in Istanbul continued - Christian places of worship were established, built or restored thanks to the 'edicts of the Sultan'. We know that protecting the ecclesiastical buildings that contribute to the cultural wealth of our country, which are no longer available to the communities of reference, is in any case a duty of the competent institutions of the state". (GV) (Agenzia Fides, 1/9/2021)

ASIA/LEBANON - "We are not celebrating two dead, but two risen in Christ". Lebanese Christians celebrate the beatification of Capuchins Leonardo Melki and Thomas Saleh, missionaries and martyrs