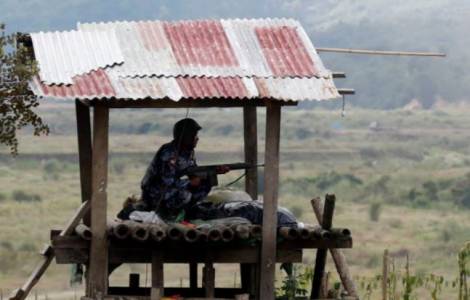 Hakha (Agenzia Fides) - The Burmese army has occupied and profaned two churches, the Catholic church of St. John and a Baptist church, in the village of Chat, in the municipality of Mindat, in the Burmese state of Chin, in western Myanmar. Ecclesial sources in the diocese of Hakha, where Mindat is located, confirm to Agenzia Fides that the attack took place yesterday, August 31, 2021. The military of Myanmar occupied the religious buildings and established their headquarters inside the two churches.
The Catholic parish priest of the Church of St. John, Father John Aung who was expelled, expresses all his indignation to Fides: "It is execrable. The military has requisitioned the church for their use. They opened the tabernacle, they took the consecrated hosts and threw them on the fall and continued trampling and looting. They destroyed all the locked cabinets. The army should know how to respect religious buildings and should not touch anything inside the church. We condemn the aggression and gratuitous violence and the desecration of our church, with the blatant violation of freedom of worship". In the village of Chat there are 68 houses, 42 of which are of Catholic families. The whole parish embraces 20 villages in the area. Upon the arrival of the military, who clashed with some militants of the local resistance forces in the area, the parish priest fled into the forest with the villagers.
Shane Aung Maung, one of the village's faithful Baptist Christians, said: "The soldiers destroyed our bibles, the sacred furnishings, the electric generators and the sound amplifier. They drink alcohol inside the church building. They slaughter the cattle.and they cook meat in the church". "Tatmadaw (the Burmese regular army, ed) is destabilizing the country, hitting people and property of the Christian Churches, killing unarmed and peaceful civilians and burning villages and houses. We are really bewildered", he adds.
The local Catholic priest Fr. David Hmun: "We are shocked. It is really unthinkable. The military of Myanmar are no longer a people's army but thus become a militant terrorist group, which commits violence on the people, on innocent civilians".
The occupation of the church by the army occurred as fighting between the military and local civil resistance groups intensified in the predominantly Christian area of Chin state.
The Institute of Chin Affairs, a non-profit organization created by ethnic Chin leaders, currently based in India, has condemned the acts of violence carried out by troops during the occupation of the churches. "The occupation of the church and the devastation of church property is a violation of the Geneva Convention. We demand the immediate end of acts against international humanitarian law and against human rights", says the Institute in a statement sent to Fides. The Institute condemns the killing of hundreds of Chin civilians in recent months and reports that, as a result of the February 1 military coup, "the country is slipping into a fratricidal war leading to ruin". Given the "resourceful and resilient reaction of the population, the coup failed", it reports, noting the formation and tenacity of "People's Defense Forces" across the nation. (JZ-PA) (Agenzia Fides, 1/9/2021) 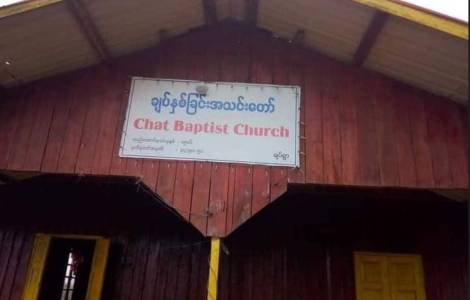 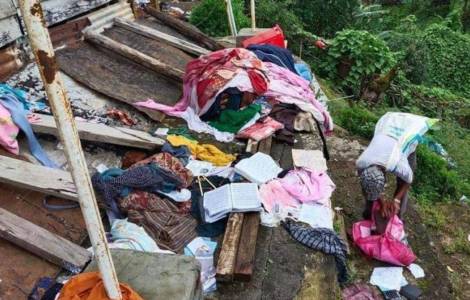