AMERICA/HONDURAS - The Bishops: "The 'Zede' are in open violation of the Constitution and to the detriment of our territorial order" 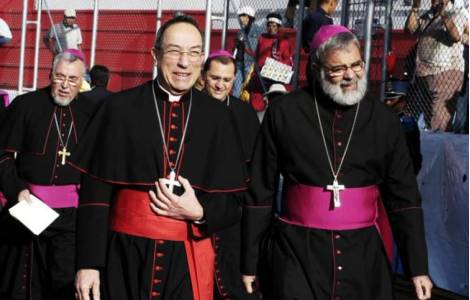 Tegucigalpa (Agenzia Fides) - "The Episcopal Conference expresses its solidarity and joins the pronouncements of the brother Bishops in their Dioceses, who have embraced the protests of civil society, demanding the non-continuation of the Occupation and Economic Development Zones (ZEDE) , as they were created in open violation of the Constitution of the Republic and to the detriment of our territorial order". This is how the Bishops of Honduras expressed themselves in a message addressed to the people of God at the end of the extraordinary meeting of the Episcopal Conference, in which "they reflected on the reality of our country and on the way our authorities govern".
The project to establish the Zede affects several regions of Honduras, with the aim of increasing the economy in the area. But according to authoritative experts, in addition to being unconstitutional, the project would transform the political and social life of the area, influencing national sovereignty, creating "a state within another state", where the autonomous territory would be managed by a Technical Secretary appointed by the President of the Honduras (see Fides, 21/6/2021).
In the message of the Bishops' Conference, sent to Fides, the Bishops express concern for "the painful uncertainty, fear, indignation that reality arouses in good Hondurans, with noble and hardworking sentiments, who see their future and that of their children", as well as the fact that "the government does not listen to or pay attention to the just and well-founded pronouncements, of many institutions of great importance in the Country", as well as "the indifference of the competent authorities and of the majority of the politicians in our country in the face of those who demand justice and respect for fundamental rights such as the defense of sovereignty and the integrity of our homeland".
The Bishops then criticize the attitude of the Congress at this juncture - "How easy it is to wash your hands of a problem of this magnitude, a problem that they themselves have caused!" - and they call the members of Congress to demonstrate "that they are interested in the common good and do not seek to safeguard personal and selfish interests".
The Supreme Court of Justice was therefore urged "not to lend itself to the political game of the National Congress and to maintain its independence, not bowing to interests contrary to the good of the Republic. In a confused and clouded environment, such as the one in which we now live as a country, it is of the utmost importance to evoke the necessary separation and independence of the Powers of the nation".
"Will this project really give us the promised benefits?" the Bishops ask, noting the insistent promotion of the Zedas in the media as the panacea for all the ills of Honduras. "If the Zede produce the development they say, why haven't they already done it?". Therefore the message clearly reiterates: "The Bishops are not against the development of Honduras, we are in favor, but not in this way. For this reason, we do not support the creation of the Zedes. We support the appeal of unconstitutionality presented by the National Autonomous University of Honduras… before the Supreme Court of Justice (CSJ), asking that article 34 of the Zede law be declared inapplicable".
When the good of the population and the well-being of every Honduran family is at stake, "it is not a question of who has more political strength", as "we are part of a big family and a beautiful country", the message continues, underlining that "we are all in the same boat, if one wins, we all win, if one loses, we all lose". This is why they exhort us not to become "passive spectators of the dispossession and irreversible decomposition of our homeland".
The creation of the Zede, they point out, "is the saddest and most ironic way to celebrate the Bicentennial of Independence, to build 'exclusive and privileged cities' in front of a population that lives immersed in poverty". In addition to being unconstitutional, the Zede also violate the first issue of the Independence Act of 1823. "Today more than ever - concludes the message - Honduras needs everyone and expects everyone's commitment to build a nation more worthy and prosperous; a nation where we fight side by side, where the good of one becomes the well-being of all, where the happiness of one is a reason for joy for all". (SL) (Agenzia Fides, 29/7/2021)