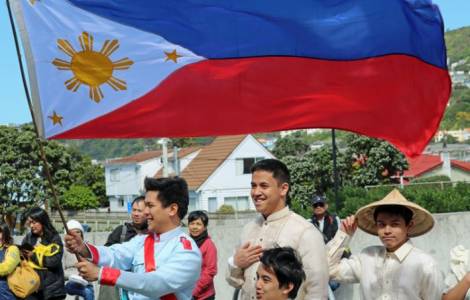 Manila (Agenzia Fides) - President Rodrigo Duterte should use the remaining time of his presidential term (elections are scheduled for May 2022) to unite the nation and restore dignity to public services, in favor of citizens: this is the call of Bishop Jose Colin Bagaforo, national president of "Caritas Philippines" who invited Duterte to reveal himself as "father of the nation", the day after the last presidential speech on "the state of the nation" (SONA 2021). "It will be important that at least during the remaining time of his mandate, he demonstrates dignity and integrity", adds Fr. Antonio Labiao, Executive Secretary of National Caritas, who urged Duterte to be "a unifying leader, especially in the midst of the Covid-19 pandemic". "We need to focus our energies on uniting the country while we are still grappling with the devastating effects of the pandemic", he said. After the presidential speech on the "State of the Nation" (SONA 2021) which constitutes an important annual public speech, in which the president takes stock of civil life and the general situation of the State, Father Jérôme Secillano, Executive Secretary of the Commission for Mass Media and Public Relations of the Bishops' Conference of the Philippines, highlighted the main challenges particularly the fight against corruption "which is a serious concern for the Catholic Church by recalling the rather difficult relations between the Catholic Church and the President over the past five years". "With corruption, resources destined for the needy are stolen", he said.
During his presidential term, Duterte's public campaign has focused on eradicating drugs, crime and corruption, but the president himself later admitted that all of these issues would go beyond his term of office. Fr. Secillano urged the citizens "to be more attentive to the promises of the candidates". "The Church will certainly continue to make its voice heard especially when the country chooses its leaders in next year's elections", he said, stressing that the criteria of transparency, honesty, attention for the common good, defense of human dignity and promotion of the poorest and most vulnerable, according to "politics" in the highest sense of "a form of public charity" in the highest sense of "form of public charity". In a video published on July 26 by the official mass media of the Archdiocese of Manila, and sent to Agenzia Fides, entitled "A Call to Prayer and Action", the faithful are invited to "be vigilant and courageous" in preparing for the next elections. The video is presented by two Bishops: Mgr. Broderick Pabillo, Auxiliary of the Archdiocese of Manila and recently appointed Apostolic Vicar of Taytay; and Archbishop Socrates Villegas, Archbishop of Lingayen-Dagupan. "Lord, save your children from darkness", prayed Mgr. Villegas. Bishop Pabillo, addressing the Filipinos, asked them to raise their voices "in the midst of the plague of terror and deception, in the midst of the plague of violence and injustice, in the midst of disease greed and corruption". "The Lord will listen to our voices - now silent and meek, now growing, not in hatred but in love for this country. He will send his light on us", said Bishop Pabillo. President Duterte's popularity has plummeted at this point in public life due to his inability to stem the rise in coronavirus cases in the country. According to an international poll by the London think tank "YouGov", Filipinos who rated the Duterte government's response to the pandemic "very good" or "fairly good" fell from 72% in May to 51% at the end of June 2021, or a drop of 21 points in one month. Many members of the Catholic Church have recently criticized the measures and arrangements taken by the government, such as the anti-terrorism law and the shutdown of the media company and the ABS-CBN television station, calling for compliance with the Rule of law and democracy. (PA) (Agenzia Fides, 28/7/2021)

ASIA/IRAQ - Chaldean Patriarch Sako: "The road to church unity is not easy"