ASIA/IRAQ - Chaldean bishops and priests on upcoming political elections: faith and ecclesial belonging are not to be exploited for electoral purposes 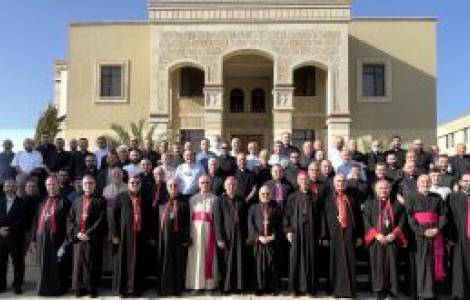 Erbil (Agenzia Fides) - In the coming months, during the campaign in view of the political elections scheduled for October, it will be appropriate to ensure that the references to faith and ecclesial affiliations are not structured for electoral purposes. The Chaldean bishops and priests ask this before concluding the days of spiritual retreat they are spending together in Ankawa, a suburb in Erbil inhabited mostly by Christians. The warning is contained in the singular message spread during the days of spiritual exercises (July 19-24) held under the presidency of Chaldean Patriarch Louis Raphael Sako, and marked by the spiritual reflections of Lebanese priest Raphael Traboulsi.
80 participants took part in the days of spiritual exercises, including 10 bishops. In the text of the aforementioned message, Chaldean bishops and priests invite citizens not to desert the polls and to choose their representatives among candidates who show that they have "competence and ability, that is, knowledge of politics and law, good behavior, a sense of the homeland, sincerity, integrity and courage. The ideal candidates - the message continues - are those who have the common good at heart, and do not have as their primary concern the defense of the interests of their own faction.
In the text, released by the official channels of the Chaldean Patriarchate, Bishops and priests address with pastoral concern to all "sons and daughters" of the Chaldean Church, confirming that they are heartened by the spectacle of their patience, constancy and love that so many show for their land, moved by faith, prayer and the precious treasure constituted by the testimonies of their martyrs. This experience of Christ's embrace, perceived in the testimonies of holiness and martyrdom that punctuate the path of the Eastern Churches, consoles and reassures the lives of many also with regard to the present and the future, in the confident hope that evil will not prevail and the good seed of the Gospel will be able to grow even in the midst of so many difficulties, "as can be seen in the parable of the weeds and the wheat" recounted by Jesus himself in the Gospel of Matthew. Recently (see Fides, 17/7/2021), Cardinal Sako himself had pointed out that the risk of fraud and the experience of having been "robbed" of the quota of parliamentary seats reserved by the electoral system for candidates from Christian communities, could also push many Christians to boycott the political elections. In an interview with the Rudaw media network, Patriarch Sako referred in particular to the "tiredness" of Christian voters, due to the widespread belief that the Christian quota "will be hijacked again" by hegemonic parties and political forces.
The Iraqi electoral system reserves 5 of the 329 parliamentary seats for Christian candidates. (GV) (Agenzia Fides, 23/7/2021)

ASIA/LEBANON - Support of the Greek Melchite Episcopate for "Lebanese neutrality"