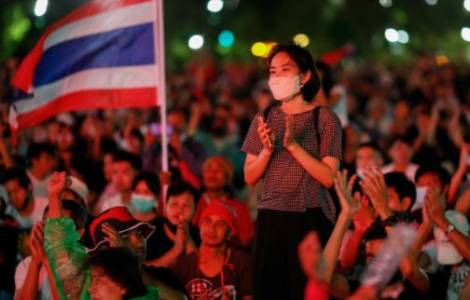 Bangkok (Agenzia Fides) - Prime Minister Prayut Chan-o-cha met in recent days about forty CEOs of major Thai companies and businesses to discuss the serious social consequences of the pandemic and its economic impact on Thailand. Businessmen have called for more generous economic aid and a clear plan for vaccination against the Covid-19 virus, given that the goal of procuring vaccines that the government had set itself has failed.
After having managed the Covid-19 pandemic well at first, the Asian kingdom now finds itself in difficulty, while the pandemic crisis has given new energy to the protest movement that has been in the news in Thailand for more than year: official figures to date, July 22, show more than 450,000 confirmed cases, with 3,697 victims, 87 more than the day before: an ascending curve between January and March, with a peak in April in terms of infections and victims. The crisis caused by the pandemic, the restrictions and the effects on the poorest segments of the population prompted the student movement to take to the streets again, and last Sunday, July 18, the last student demonstration against the government ended with violent accidents, injuries and arrests. In recent weeks, however, several groups, including some former political allies of Prime Minister Prayuth, have staged street protests criticizing the government for its inability to cope with the rapid spread of the virus in the Southeast Asian quadrant. The deaths of several citizens on the streets of Bangkok have sparked new accusations against the government. On July 18, the demonstration of around a thousand students from the "Free Youth" group, which in the past drew tens of thousands of demonstrators to the streets, was faced by a line-up of about 1,500 riot police, escorted by equipped trucks with water cannons. Police used fire hydrants, tear gas and rubber bullets to disperse protesters as they began marching towards Prime Minister Prayut's office to demand his resignation, due to the poor management of the pandemic and the crisis due to the impact of the virus on the economy. Some protesters attacked the police and eight officers were injured in the clashes, while more than a dozen young people were arrested. "Free Youth" movement has been an active for almost two years now, but especially in the last year it has swelled its ranks also with ordinary citizens - not just students - and even a few Buddhist monks. The main demands of the movement are: the resignation of the government of Prayut; the amendment of the Constitution, to make it more democratic and greater transparency on the political and economic activities of the royal family. The restrictions for Covid have allowed the government to avoid mass gatherings on the streets for months, but in recent weeks, rising cases and victims have brought people back to the streets of Bangkok. (MG-PA) (Agenzia Fides, 22/7/2021)