ASIA/INDONESIA - National prayer for the end of the pandemic 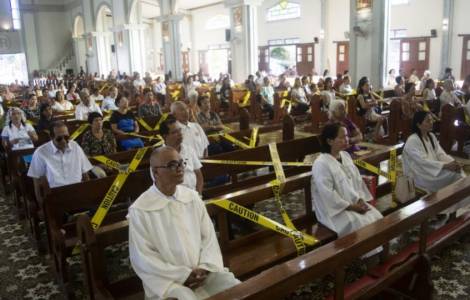 Jakarta (Agenzia Fides) - "We behave in the best possible way, respecting the protocols, and for the rest we entrust ourselves to God who always has His unfathomable plans, which human beings do not understand. We believe in the power of prayer", says to Agenzia Fides Father Heri Wibowo, Catholic priest and Executive Secretary of the Interreligious Affairs Commission within the Episcopal Conference of Indonesia, when presenting the initiative of the great national prayer launched by civil institutions, and welcomed by the Catholic Church and other Indonesian religious communities, to invoke God for the end of the pandemic. The Indonesian Ministry of Religious Affairs has invited all citizens to a short daily one-minute period of prayer, in addition to the material and spiritual commitment of all fellow citizens, urging a collective effort of solidarity and national unity. In the widespread appeal, the Ministry indicated that "dozens of patients suffering from Covid-19 do not have access to hospitals, or to burials, or to funeral services", while hundreds of doctors and nurses have contracted the virus, there are no beds available and oxygen is in short supply in hospitals. The Minister of Religious Affairs, Yaqut Choli Quomas, has publicly stated: "As believers of all religions, we know that prayer is the best way to implore God's intervention and restore hope and optimism to each and everyone". The national daily prayer campaign, launched on July 11, is also supported by President Joko Widodo, who has stated: "In this very difficult time, as we make all the necessary material efforts to prevent the rapid spread of Covid-19, let us also unite our spiritual energies with prayer. We count on the active participation of the entire Indonesian people". On July 11, the entire nation stopped for a minute of silence and thousands of people joined through the Ministry's official YouTube channel. Indonesian Catholics have welcomed this campaign called “Hening Cipta Indonesia” by posting it on their social media platforms and spreading it among the communities throughout the archipelago. "So far, the Indonesian administration has done many good things to help Covid-19 patients recover. One thing is necessary as a nation: to pray together at the same time. Through a moment of silence at the national level, we pray for the deceased doctors and health workers, we pray for the healing of all the sick, we pray for the end of the pandemic", explains to Fides Yohanes Bayu Samodro, Secretary of the General Direction for the Catholic community, within the Ministry for Religious affairs.
The broad popular participation registered by the initiative launched on July 11 has prompted religious civil leaders to continue the prayer campaign, which continues in everyday life, with the slogan "Pray at home: the nation knocks on the door of paradise". The initiative was publicly supported by Cardinal Ignazio Suharyo, Archbishop of Jakarta, and other prominent religious leaders in the Indonesian nation. "May the Lord make the spirit of community unity, the sense of true brotherhood and compassion towards others blossom in each Indonesian in this difficult time", said the Cardinal in his prayer. (MH-PA) (Agenzia Fides, 17/7/2021)