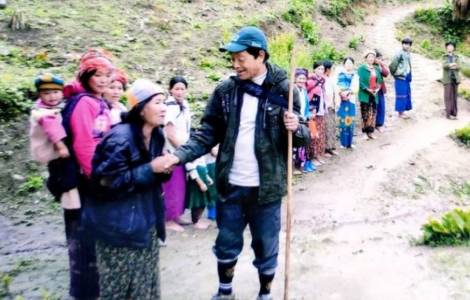 Myitkyina (Agenzia Fides) - Bringing the Gospel "to the ends of the earth": with this spirit, 72-year-old catechist John NgwaZar Dee continues his missionary work that has been going on for 50 years.
John NgwaZar Dee is the first catechist of the indigenous Lisu tribe of the diocese of Myitkyina, in the Kachin State, in Northern Myanmar. He was the first missionary in Zang Yaw, a remote place in the territories of the parish of Putao under the diocese of Myitkyina. When he arrived in the village, between the Lisu and Rawang indigenous people, he began to read the Gospel and talk about the salvation that Christ Jesus gives, addressing people who had never heard of him. To reach the village you have to walk for 15 days along rough and stony paths. The parish priest of the church of Putao hardly manages to reach that inaccessible area, sometimes not even once a year, given the long journey. But despite the distance, catechist John when he was younger visited the village 14 times, sowing the Gospel. Thanks to his missionary zeal and his example of life, almost all the inhabitants of the village and neighboring villages, attracted by the message and figure of Christ, asked to be baptized and embraced the Catholic faith. John recalled that from 1969 to 1970 he attended, with other young people, the training institute for catechists run by the missionaries of San Colombano. "It was a hard and difficult journey and some of my classmates dropped out; it is difficult for us catechists to find a livelihood, to survive", he says in a note sent to Fides by the diocese of Myitkyina. "But I have a simple conviction: whenever I'm in difficulty I believe that God is with me and I turn to Him. He is my refuge", says John, recounting how, in difficult times of widespread violence in Myanmar, the pastoral and catechetical activities continue and it is precious because it gives consolation and hope to the people who suffer.
"I often repeat to myself Jacob's words: If we accept good from God, why shouldn't we also accept evil?", he explains. "God provides and does not abandon his people. The Lord gives me strength. I do not work for the praise of men but for the Kingdom of God. People sometimes praise you and sometimes despise you. But the Lord is faithful, loves and always forgives", he notes. For the faithful of ethnic Lisu and Rewang, catechist John is a solid point of reference.
In his constant catechetical work, which lasted many years, he never wanted any reward from them: "The reward is given to me by the Lord. So far I do not even own a house. The house I live in now is not mine, but I do not care because the Lord is with me", he says. His testimony is also precious for young people. Young Catholics and volunteers look to him and go to remote villages to carry out health education, education and pastoral animation activities for the little ones. They are the so-called "zetaman", or "little evangelizers", characteristic figures of the Catholic Church in Myanmar: these young volunteers reach isolated villages, in inaccessible areas, in rural and mountainous areas and stop there. They share the life of the community for a few days, spend a lot of time with the children, in a style of presence made of love, friendship and simple sharing of life. If asked, they give testimony of their faith, tell who they are and how the encounter with Jesus changed their lives. The "zetamans", present in all the dioceses of Myanmar, are at the service of the weakest and most abandoned humanity. Thanks to figures such as catechist John NgwaZar Dee, the Churches ask their young people (aged 18 and over) to donate at least three years of their life for a service to the diocese as "zetaman", to be sent as young missionaries in difficult situations, in the mountainous villages, among people in conditions of extreme poverty, in the midst of armed conflicts. Hundreds of young people thus carry out a precious work of evangelization and human promotion that makes the presence of the Church felt "to the ends of the earth". (PA) (Agenzia Fides, 10/7/2021)