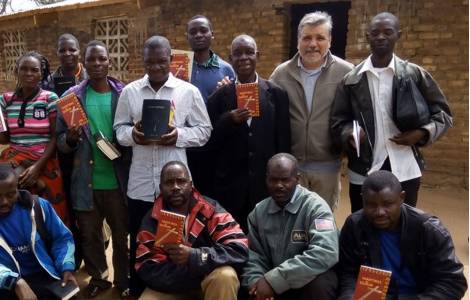 2021-09-22
In the north, several areas reconquered from the jihadists; "But as long as security is precarious, it will be difficult for the activities of the Church to resume"

2021-07-29
Crisis in Cabo Delgado: "The military route is dangerous and no one knows how it will end" Catholic NGOs warn

2021-07-10
A Consolata missionary: "For a hundred years at the service of the people, bringing the proclamation of the Gospel"

2021-06-10
Due to the conflict, the population fleeing violence is unable to find shelter

Maputo (Agenzia Fides) - "One can take stock almost after a century of the presence of the Consolata Missionaries in Mozambique: the choice, made from the beginning, to concentrate efforts on schools and the formation of the laity, has formed resistant Christian communities to the 'storms' that have been unleashed on the population for more than 30 years: war for independence, nationalization of structures, civil war, natural disasters. Most of the leaders who guide the fate of the country today have dropped out of Catholic schools. The Mozambican Church today is asking for new qualified presences, such as the leadership of diocesan seminaries and formation of the local clergy".
This is what Father Ayres Osmarin, a Consolata missionary, reports in an interview to Agenzia Fides, speaking of the commitment and challenges that the religious belonging to the congregation founded by Blessed Giuseppe Allamano face every day in the African country.
"In Nampula, for example, there are 40 parishes - explains Fr. Ayres - there are 36 diocesan priests and 12 religious. They are very large parishes, there can even be 100 kilometers between one and the other, so priests try to do the best they can amid enormous difficulties. In addition - he underlines - there is a very large young population here: in 2020 the second national youth day should have been celebrated in Nampula, which was canceled due to the spread of Covid19". The religious notes: "youth have few job prospects, even that is perhaps one of the causes of the war in the neighboring region of Pemba and Cabo Delgado, and therefore it is certainly a challenge for our church, and at the same time it is a source of future and hope for families and for all of us". The commitment of the Consolata missionaries in Mozambique for evangelization also passes through projects of a social nature and economic development: "In recent years - says Father Ayers - we have carried out a restructuring of the premises in what used to be the seminary, and this allowed us to obtain the necessary permits to open a bilingual secondary school where students, aged between 12 and 17, can train in both Portuguese and English".
As part of an initiative that aims to improve the standard of living and employment conditions of the community assisted in Nova Mambone, the Consolata missionaries run a salt pan. "It has 33 permanent workers - the priest reports - to these, about sixty are added during the salt harvesting period which usually runs from April to December. Therefore, about 93 people and their families will be able to benefit from the project". The salt pan is a fundamental activity for the local economic and social fabric, both directly for the workers employed in the salt pan and, indirectly, for the related activities it generates: "Thanks also to the help of the local community - he specifies - the missionaries are bringing forward a library for local school pupils, support for the payment of school fees for various pupils in schools in the area including the children of workers, literacy courses for workers, income-generating micro-activities of a group of women".
The first group of Consolata missionaries arrived in Mozambique in 1925, disembarking in the port of Beira, in the south of the country. First steps of a presence that has extended to many regions of the African state and whose action has greatly contributed to the growth of the local Catholic Church and to the development of the Mozambican people. "The reason for the presence of the Consolata missionaries in Mozambique - he concludes - is, and will remain the same as always: to dedicate themselves to the mission, to life, bringing the proclamation of the Gospel to the people". (ES) (Agenzia Fides, 10/7/2021)