ASIA/PHILIPPINES - Life of faith in the family: the lay movement "Couples for Christ" celebrates its 40th anniversary 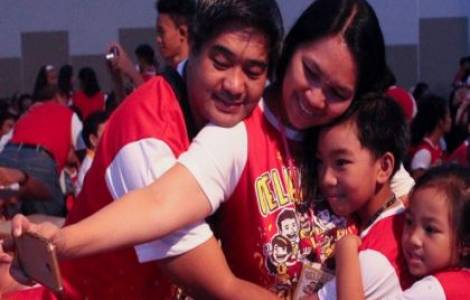 2022-09-28
Support is organized for people affected by typhoon Karding: Refugees under the protection of St. Michael

2022-09-08
Missionaries accused of supporting terrorism: civil society takes the field alongside them

2022-09-07
The Silsilah movement: the culture of dialogue and peace begins with children

2022-08-31
Confirmation of the National Director of the Pontifical Mission Societies, Msgr. Esteban Lo

Manila (Agenzia Fides) - The lay ecclesial movement Couples for Christ (CFC), which aims to live the faith in family life, has celebrated its 40 years of existence.
"Let’s celebrate the Lord's Day as one family. Let's enjoy the great and wonderful love of God, celebrating the 40th anniversary as a Catholic community born for the renewal of faith in the family", Corina Garcia, a member of the CFC of Manila told Fides. Members of the Movement shared messages of hope and on social media groups (Facebook, Viber, WhatsApp, etc.) and on all multimedia platforms to say "how good the Lord is who has blessed Couples for Christ", says Julieta Amor Abante, member of the CFC.
The movement began in 1981 with 16 Filipino couples who participated in a seminar organized by the "Ligaya ng Panginoon" (Joy of the Lord), a charismatic Catholic community. Over the years, CFC has inspired couples, singles and young people to dedicate their lives to the mission of "renewing the face of the earth with faith". "As we celebrate the organization's 40th anniversary, we are once again committed to evangelization, family renewal and care for the poor", said Manila-based CFC member Nunally Repatacodo.
Recognized by the Holy See by the Vatican as an international association of lay faithful of pontifical right, CFC is currently present in 122 countries and territories. At first it only included married couples, but later it began new "family ministries": "Kids for Christ", "Youth for Christ", "Singles for Christ", "Handmaids of the Lord", and "Servants of the Lord". CFC has also launched various social development programs to reach the poorest families in society. Among these are "The Order of San Michele", which offers training courses for staff in uniform; the "Oikos" program, which takes care of the environment; the "Migrants Program", aimed at offering Christian values to foreign workers who leave; "Isaiah 61,1", to give comfort to people deprived of their liberty; "ReForm", which facilitates the social reintegration of former drug addicts; "St. Thomas More and Associates", which guides people in civic and social awareness. "Answering the Cry of the Poor" program was also founded, which has already built homes for many beneficiaries and helped thousands of children from poor families through the granting of scholarships in primary, secondary, high school and universities. (SD-PA) (Agenzia Fides, 5/7/2021)