ASIA/SOUTH KOREA - Cardinal Yeom: we pray for true reconciliation, unity and peace on the Korean peninsula 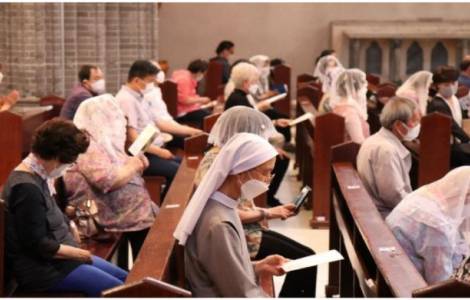 2022-05-05
Archdiocese of Seoul sends priests to the mission

2021-07-01
Cardinal Yeom: we pray for true reconciliation, unity and peace on the Korean peninsula

2021-02-09
Twenty new priests in Seoul, open to the challenges of the mission

Seoul (Agenzia Fides) - "Let us pray for true reconciliation, unity and peace on this divided land, in rememberance of the tragic war", said Cardinal Andrew Yeom, Archbishop of Seoul and Apostolic Administrator of Pyongyang in the solemn "Mass for the peace on the Korean peninsula "on the occasion of the 71st anniversary of the start of the Korean War (1950-1953). As reported to Agenzia Fides by the Communication Office of the Archdiocese of Seoul, Several priests and hundreds of Catholics also joined the Mass while following Covid-19 regulations by wearing masks and maintaining social distance.
"The Catholic Church of Korea strives in every possible way to carry out the mission of becoming an effective instrument for the reconciliation and unity of the Korean people", reads the note sent to Fides, which recalls how the Catholic Bishops' Conference of Korea (CBCK) has designated June 25 as a "Day of Prayer for National Reconciliation and Unification".
After reciting the Rosary for Peace, Cardinal Yeom thanked the Lord for "allowing us to celebrate the Mass for Peace on the Korean peninsula even in the difficult moments due to the pandemic".
In his homily, the Prelate recalled that "Jesus says to forgive not seven times but seventy times seven whoever sins against us. No process of peace can begin unless a genuine attitude of forgiveness takes root in the human heart . Sometimes we wonder why we must forgive those who do not even deserve our forgiveness. However, forgiving is actually a condition for being forgiven by God, and it is also the condition for mutual reconciliation; it is therefore the condition for being reconciled with God. And this is essential for our salvation", he said.
The Cardinal added: "I would like to reaffirm that peace is not simply the absence of war, however silencing the weapons and extinguishing the outbreaks of war is an inevitable condition for starting a journey that leads to peace in its various aspects. Offering and accepting forgiveness is the essential condition for making the journey towards authentic and lasting peace. I am fully aware that forgiveness can seem contrary to human logic, which often gives in to the dynamics of conflict and revenge. But forgiveness is inspired by the logic of love, that love that God has for every man and woman, for every people and nation, and for the whole human family". Cardinal Yeom continued: "As Jesus tells us in today's Gospel, all of us have gathered here in his name, we ask with all our hearts to our Father who is in heaven to grant us all this. I am sure that our prayer will certainly be heard, as the Lord says, who is present here and now among us". The Mass was organized by the National Reconciliation Committee of the Archdiocese of Seoul which was founded on March 1, 1995 by the late Cardinal Stephen Kim Sou-hwan, as a tool for building reconciliation and peace between South and North Korea. With the slogan "As long as we remember them, they are alive. As long as we pray for them, our prayer will be answered", the Committee has intensified the prayer campaign for the Catholic faithful of the North who live their life of faith in secret and at great personal risk. The Committee also launched several humanitarian initiatives for the peoples of the North, helping North Korean refugees living in South Korea, promoting peace education.
On August 15, 2020, the diocese of Pyongyang, in the capital of North Korea, was consecrated to Our Lady of Fatima, on the occasion of the 75th anniversary of the liberation of Korea from Japanese colonial rule and the 70th anniversary of the outbreak of the war of Korea. (PA) (Agenzia Fides, 1/7/2021) 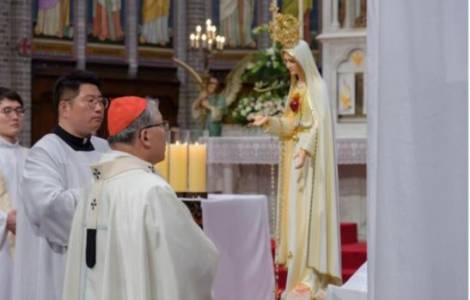