VATICAN - Communities around the world united in Marian prayer for Myanmar 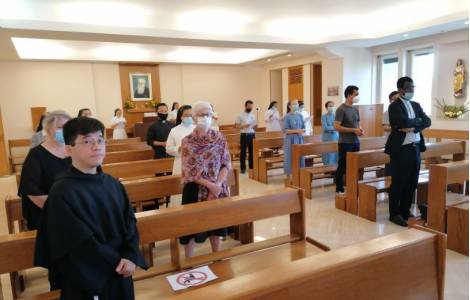 Vatican City (Agenzia Fides) - "We breathed the universality of the Church. In a prayer meeting lived in simplicity, with the recitation of the Rosary, we wanted to place the Church and the suffering people of Myanmar under the loving protection of Mary": with these words Vietnamese friar Father Dinh Anh Nhue Nguyen OFM Conv, Secretary General of the Pontifical Missionary Union reports to Fides the atmosphere and the spirit lived in the special prayer of the Rosary, organized yesterday, June 29 by the Pontifical Mission Societies (PMS) at the International Center for Missionary Animation (CIAM), to invoke peace in Myanmar. In the Marian prayer, representatives of the PMS and members of the Association of priests, men and women religious of Myanmar in Rome were gathered "in presence" in the CIAM chapel. An Internet connection was also set up which allowed the national directors of the Pontifical Mission Societies around the world, religious communities on five continents, individual faithful and missionaries to spiritually join the assembly. The prayer was conducted in Italian and Burmese, and followed the celebration of the Glorious Mysteries of the Rosary, each with a particular prayer intention. The purpose, Father Nguyen explained, was "to express deep closeness to that nation that suffers and to pray to the Virgin Mary in full communion with Pope Francis who has repeatedly recalled Myanmar in his appeals". Msgr. Marco Tin Win, Archbishop of Mandalay, other Burmese priests and religious such as the communities of the Missionary Sisters of the Blessed Sacrament, among the promoters of the prayer meeting, were present in connection from Myanmar. Sister Giusy Sozza, Mother General of the congregation said she was "moved to see the sisters, who live in great difficulty and suffering, connected and united in community prayer from Myanmar".
The Burmese faithful are following the directions of their Bishops who, in their recent assembly, have the prayer of the Rosary as the "main way" to regenerate a climate of peace in the nation, inviting all the faithful in their respective dioceses to recite the prayer of the 'Hail Mary for reconciliation.
The prayer at CIAM saw Catholic communities, in Italy and abroad, unite, at that same time, in spiritual communion, to implore God for peace in Myanmar "I would like to thank all those who were with us in presence such as the General Secretaries of the Pontifical Missionary Societies, and those who were with us online like the Bishops, priests and religious of Myanmar and like Archbishop Protase Rugambwa, Secretary of the Congregation for the Evangelization of Peoples, and those like Cardinal Luis Antonio Tagle, Prefect of the Congregation for the 'Peoples' Evangelization, the Archbisho Dal Toso, Pesident of the Pontifical Mission Societies, who were present with the heart, in communion of prayer. As a Church, we believe in the missionary and evangelizing power of prayer and we entrust the nation of Myanmar to the Father and the Virgin Mary", concluded Father Nguyen. (PA) (Agenzia Fides, 30/6/2021) 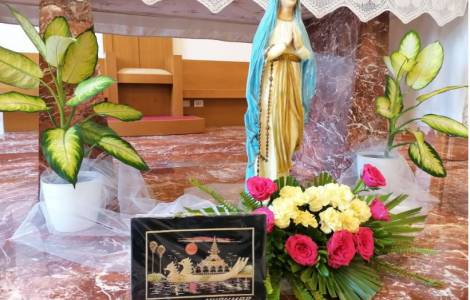