ASIA/MYANMAR - Catholic priests arrested and released by the army: violence in Mandalay 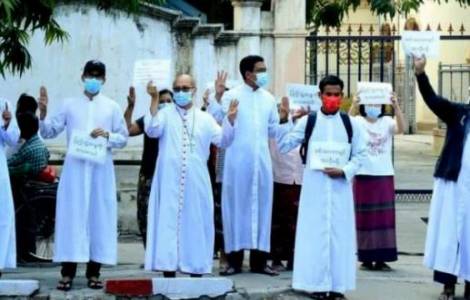 2022-01-07
The parish of St. Michael in Myitkyina entrusted to the Salesians

2021-12-29
The funeral of Catholic civilians massacred in Kayah

Mandalay (Agenzia Fides) - The Burmese military have arrested and released six Catholic priests and a lay Catholic in the village of Chan Thar, in the Archdiocese of Mandalay, 700 km north of Yangon. As confirmed to Agenzia Fides by Fr. Dominic Jyo Du, Vicar General of the Archdiocese of Mandalay, on the night between 12 and 13 June Burmese soldiers raided the complex of the Church of the Assumption and the adjoining house of the clergy, and arrested the parish priest and other priests who were visiting him, carrying out a thorough search of the structure. The raid was motivated by the fact that, according to some informants, some parliamentarians of the National League for Democracy are hiding in Catholic churches and Buddhist monasteries. In the night-time blitz, the military pulled down the gate of the complex of the Catholic Church of the Assumption, built 200 years ago by the French missionaries of the Paris Foreign Missions (MEP). Due to the arrival of the army, many villagers, including the elderly, women, the sick, fled to the nearby forests and then the next day, at the end of the operation, they were able to return to their homes. As Fr. Dominic Jyo Du reports, on June 13 around 1.30 pm they were all released: "It was still a terrible experience, but, when a priest was told to take off his sacred habit, the parish priest objected, saying that they could also kill him, but he would not do it. He was courageous. The military did not insist and they respected them. Sometimes the military respects the men of God, sometimes they do not. It depends on the people". The local people were able to embrace the Catholic priests again.
The first French Catholic missionary priest Fr. Joseph Pho, MEP arrived in this village in 1902, while today a clinic opened by the Franciscan nuns in 1919 is still operating in the village. The Catholic presence is much appreciated by the whole population. In the current crisis situation, thousands of people from all walks of life are arrested, jailed "because of incorrect information, provided by pro-military informants", reports a source of Fides. In Mandalay, clashes continue between the People's Defense Force and Burmese police and army officers who continue to carry out raids and night searches in homes, in civil buildings such as schools, in places of worship such as churches, pagodas, monasteries. In response, the resistance forces organize themselves to hit military targets. Mandalay, the ancient capital of Burma (now Myanmar) before the arrival of the British, is full of Buddhist temples and represents the mystical spirit of the country, marked by Hinayana Buddhism. (PA-JZ) (Agenzia Fides, 14/6/2021)

AMERICA/GUATEMALA - Increasing violence and conflict in the department of Solola, the Bishops call for dialogue and prayer