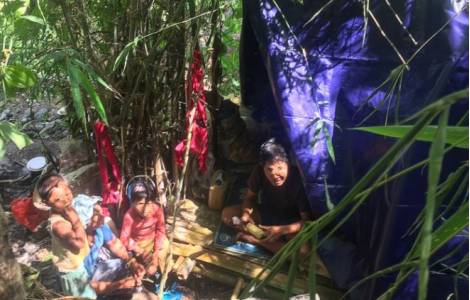 Loikaw (Agenzia Fides) - "We are very sad and worried to find ourselves in this critical situation. Our peaceful lives are destroyed in the state of Kayah. There are no human rights and freedom. People flee to safe places due to armed conflicts. We have lost everything", says Father Celso Ba Shwe, Vicar General of the diocese of Loikaw, who governs the community after the sudden death of the Bishop Stephen Tjephe, to Agenzia Fides. In the state inhabited by the ethnic Karenni population, violence is strong and widespread, and after the coup d'état on February 1st, there have been popular demonstrations and the repression implemented by the army.
The Vicar says: "We are reliving the nightmares of the civil war that took place from 1948 to 2012 in the state of Kayah. It seems to be even much worse than before. No place is safe in our state. From time to time, displaced persons have to flee from one place to another. As of June 7, 2021, 23 camps for internally displaced persons have been set up and about 45,000 displaced persons are under the care of the Catholic Church of Loikaw. But now some of them have to flee to another place. They are again scattered", he says.
In this period of the rainy season, the difficulties increase: "Most of them are women, children and the elderly, some are pregnant and disabled. Spending days in the jungle without adequate shelter, food and clean water is very dangerous for them. We do our best to provide humanitarian aid as much as possible and medical support is also absolutely necessary. We are planning to build a camp for internally displaced persons in the soccer field of our seminary, located in the diocesan center. However, even there their safety cannot be 100% guaranteed". Since the coup in February, the diocese of Loikaw has expanded the dispensary into a 50-bed hospital and has opened two more clinics in the parishes of Daungankha and Pruso. "The two small clinics in the parishes had to be closed when the villagers were forced to move. We are now organizing a new dispensary in Dorokhu village, where more than 5,000 displaced people have found shelter. The Sisters of Reparation and some retired nurses have joined us and they will take care of that clinic", says Father Celso.
"Another concern - notes the Vicar - is the imminent famine, given that all access to food, goods and gasoline from outside the State of Kayah are blocked. There are already shortages of food and gasoline. It is not safe to go around. And it is also the season of cultivation. If people cannot sow and cultivate in due time, then famine and hunger will surely come".
Father Celso concludes: "The population has a strong desire to put an end to the current armed conflict between the Burmese military army and the Karenni People's Defense Force militia, formed by civilians who have taken up arms to defend themselves from military attacks. Everyone would like to return to a normal life. However, they also have a strong desire for freedom and justice. Today people see no other option and defend themselves by any means possible, since many innocent civilians are arbitrarily detained and killed every day". "This is why an intervention by the international community would be important. The Church is close to the population and never encourages violence: today we reiterate the request for a political dialogue between the military junta and the civil government. And we entrust ourselves every day to God, praying so that, through these trials and difficulties, he may once again give a peaceful and prosperous life to the people of Myanmar". (PA) (Agenzia Fides, 10/6/2021)