VATICAN - Sister Palmide Gamba, with the heart of a mother who brought forth many sons and daughters in faith 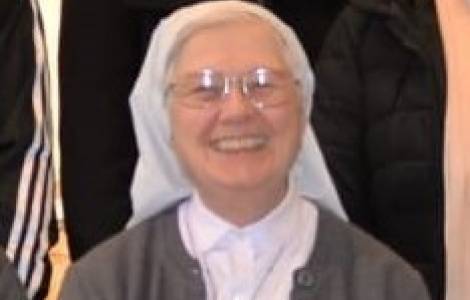 Vatican City (Agenzia Fides) - Sister Palmide Gamba, of the Franciscan Missionary Sisters of Mary, died on May 18, 2021. The funeral was celebrated on May 20 in the chapel of the sisters' convent, in Grottaferrata (Rome). In his letter of condolences to the General Superior of the Institute, the Prefect of the Congregation for the Evangelization of Peoples, Cardinal Luis Antonio G. Tagle, wrote: "She approached every problem with the heart of a mother - with judgment and confidence - as the daughter of the theological virtue of the Hope. She felt called to share the good news of the gospel".
Sister Palmide was born on July 21, 1935 in Brescia (Italy) and attended the novitiate in Grottaferrata, where she made her temporary vows on March 19, 1965, and her perpetual vows in Macau, on April 11, 1971. She studied Foreign Languages and Literature at the University of Pisa, and studied catechesis pastoral care in Paris and Chinese literature in Taiwan, where she was also active in pastoral care for many years. In her life as a religious, she has held various positions of responsibility: she was a teacher, superior, general and provincial councilor, formator, leader of the lay association, member of the "China team" ...
After a few years working for the Congregation for the Evangelization of Peoples in the Vatican, she was entrusted with the task of taking care of the formation and accompaniment of the Chinese sisters in Italy who came to Rome to complete their studies. As pointed out by those who have known her for a long time, her great desire was to bring the Good News to mainland China. Due to the political situation, this was not possible for her, but at the same time she contributed to the realization of her wish, albeit "from a distance" by forming intellectually, spiritually and humanly the Chinese sisters who came to Rome.
Faith, simplicity, humility and joy were just some of the virtues and qualities that Sister Palmide embodied. She was a woman full of love for Christ, a beautiful example of how to love the Lord and our brothers and sisters. She was a "mother" who brought forth so many sons and daughters in faith, especially to the Church in China.
She helped many to come closer to Christ, to believe in him and to testify to the love of the gospel not only in words but with life. For many, she was a mother, sister and friend. The Franciscan Missionary Sisters of Mary and the Church in China are now entrusted to her intercession, so that they may continue their providential work of evangelization along the same path shown by her. (SL) (Agenzia Fides, 8/6/2021)