ASIA/MYANMAR - Another Catholic church bombed in Kayah state: news of the massacre in Yangon not confirmed 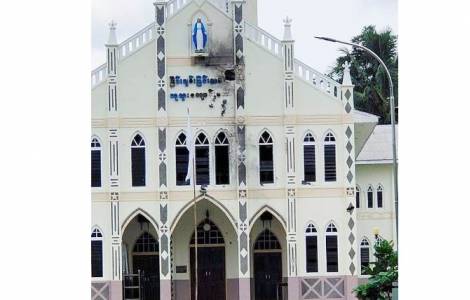 Demoso (Agenzia Fides) - In the city of Demoso, Kayah State, in eastern Myanmar, the Catholic Church of Our Lady of Peace in the parish of Dongankha, in the Diocese of Loikaw, was intentionally attacked by the Burmese army and suffered considerable damage. It is the sixth Catholic structure affected by attacks or incursions by the army. As reported to Fides by a priest of the diocese, Father Paul Tinreh, no injuries or victims were reported, and the church is one of the buildings attacked in the area: several houses were damaged or burned by indiscriminate artillery bombings carried out yesterday, June 6, since the early hours of the morning.
For weeks now, the local Church has made its facilities available to the displaced people fleeing the bombings: next to the church complex, there is a nursing home run by the Sisters of Reparation where, together with the older nuns, there are about 150 vulnerable people from Dongankha village, including women, the elderly and children. "The parish priest also lives with them, but in reality, they are not safe. Since Kayah State has become a war zone, no place is safe", Father Francis Soe Naing, another local priest, told Fides. "We have appealed to the military not to attack churches because many people, especially the most vulnerable, are taking refuge in them. But the appeal has fallen on deaf ears.
One of the reasons they are attacking the Catholic Church is that, by collaborating with many donors, the Catholic Church has taken initiatives to help more than a third of the total population of Kayah State (more than 300,000 people) who have been forcibly displaced due to indiscriminate attacks by the military regime", adds the Jesuit Fr. Wilbert Mireh SJ in a message sent to Agenzia Fides.
"Another reason why they attack churches is because they no longer have a shred of humanity or heart", he notes.
In the parish of Dongankha, around the church that was hit yesterday, there are about 800 Catholic families, for a total of about 4,600 people, pastorally assisted by 3 priests, 2 religious brothers, 4 nuns, 1 catechist and 15 volunteer pastoral assistants.
According to information released by the local Church, this is the sixth time in two weeks that Catholic churches or institutes in Myanmar have been hit or affected by army violence. In recent days the following have been affected by attacks: the Church of the Sacred Heart of Jesus, in the town of Kayanthayar Sur, hit by artillery that destroyed the left side of the church, leaving 4 dead and many wounded; the Cathedral of the Sacred Heart of Jesus, in the diocese of Phekhon; the Catholic Church of San José, parish of Demoso; the Church of Our Lady of Lourdes, in the parish of Domyalay, a recently built and not yet inaugurated church; and we must add the assault on the Intermediate Major Seminary (where there are 1,300 refugees) with the murder of a volunteer.
In another scenario, the mass media has spoken of a "massacre" in the village of Hla Swe, in western Yangon. The news, according to Fides sources, has been manipulated since the situation has remained the same for weeks. In fact, according to Fides source, 3 people were killed by the military and about 10 people were arrested, while more than a thousand have fled, in military actions that do not constitute a massacre. According to a local priest, the people of the area are hiding in rural areas and in other villages but, due to checkpoints built by the military, it is not possible to send humanitarian aid. There are four small Catholic villages in the area, but no church has been attacked.
(PA-JZ) (Agenzia Fides, 7/6/2021)