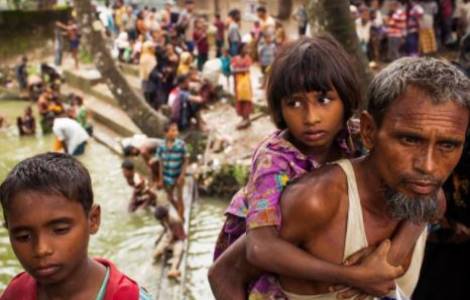 New York (Agenzia Fides) - The Burmese Government of National Unity (Nug), the "shadow executive" created abroad last April to counter the February 1 coup, has formalized a new policy towards the Rohingya, the Muslim minority expelled, between 2016 and 2017, from the Burmese state of Rakhine across the border, in Bangladesh. The new government policy, which continue sto recognize Aung San Suu Kyi as its leader, was made official yesterday, June 4, and bears the name of "Policy Position on the Rohingya in Rakhine State". The new position, which overturns the attitude of all previous governments, was explained to the international press by Deputy Foreign Minister U Moe Zaw Oo and NUG spokesman, Salai Maung Taing known as "dr. Sasa".
With the new policy, the new shadow government recognizes both the rights of the Rohingya and the atrocities they have suffered in the past and indicates an unprecedented change in a country where it was even forbidden to pronounce the name of the community, replaced by "illegal Bengali immigrants" . "We will actively seek justice and responsibility for all crimes committed by the military against the Rohingya and all other peoples of Myanmar throughout our history", reads the government statement, sent to Fides, in which the executive also commits to the international justice: "We intend, if necessary, to initiate trials to grant the International Criminal Court jurisdiction over the crimes committed in Myanmar against the Rohingya and other communities". Until now, Naypyidaw has always denied it.
Finally, the Nug publicly commits to abolishing the process of the so-called "National Verification Card process", a coercive system that requires Rohingya to identify themselves as "foreigners". That is, it intends to guarantee citizenship rights based "on birth in Myanmar or birth anywhere as a child of citizens of Myanmar" and to encourage the "voluntary, safe and dignified repatriation" of Rohingya refugees outside the country (over one million in Bangladesh alone). Finally, the Nug invites "the Rohingya to join us and others in participating in this spring revolution against the military dictatorship in all possible ways".
There are currently no Rohingya in the new government, which the government spokesman described as "brothers and sisters". But the new policy, urged by several countries, should now also pave the way for their presence in the executive which was formed on April 16 by several parliamentarians elected in November and ousted by the military coup carried out by Tatmadaw, the Burmese army led by Min Aung Hlaing. The executive is made up of 26 ministers and four leaders, including State Councilor Aung San Suu Kyi and President Win Myint (both under arrest).
In the meantime, reports of indiscriminate violence continue to arrive from Myanmar (where more than 800 have died and 4,500 have been arrested for protest activities), in particular from Kayah State where carpet bombings have marked the last week. A priest from one of the seven Catholic parishes of the diocese of Loikaw (Demoso, Dongankha, Tananukwe, Donganrao, Domyalay, Kayantharya and Loilemlay) confirms to Fides that the villages have emptied: "All the faithful have left - explains the priest who asks for anonymity for security reasons - and I myself have had to seek refuge in the mountains for two weeks now. There are very few who have chosen to stay in their homes". (MG-PA) (Agenzia Fides, 5/6/2021)