ASIA/PAKISTAN - A Christian couple sentenced to death for blasphemy acquitted: a victory for justice, but who will pay for the suffering of the innocent? 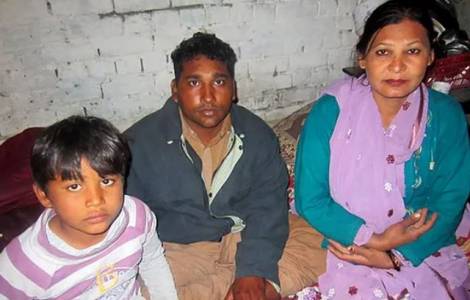 Lahore (Agenzia Fides) - "It is a victory for justice. It is a victory of freedom. I carried this mission in the name of Christ, to save two innocent victims. It is, therefore, also a victory of faith, because we believed in God's help in this process. The Court has recognized the unfounded charges against Shafqat Emmanuel and his wife Shagufta Kausar, unjustly convicted of alleged blasphemy. Today we are happy for this positive result", declared to Fides Catholic lawyer Khalil Tahir Sandhu, a member of the defense team who carried out the appeal process before the Lahore High Court, which yesterday, June 3, announced the acquittal of the Christian couple sentenced to death for blasphemy in April 2014.
Adds lawyer Sandhu: "Justice is done, but who will give this innocent couple 8 years of life back? Who will pay for the false accusations? Who will give eight years of life back to children who grew up without parents and without regular schooling? It is necessary to review the distorted mechanism that leads to such consequences and generates so much suffering for which no one will be identified as responsible".
"It took 8 years for Shagufta Kausar and Shafqat Emmanuel, the couple accused of blasphemy in July 2013 to receive justice. With the verdict that frees them, we thank God for this good news. Now the task of keeping them safe remains a top priority. They have been in danger, but leading a normal life for these victims is very difficult, even though the High Court has released them. We hope and pray that they find a safe place to live", comments Fr. Bonnie Mendes, priest of Faisalabad, in a message sent to Agenzia Fides.
Shafqat Emmanuel and his wife Shagufta Kausar were charged under Article 295, paragraph "C" of the Penal Code of Pakistan for spreading offensive comments against the Prophet Muhammad in SMS text messages sent to complainants Malik Muhammad Hussain and Anwar Mansoor Goraya. The couple were sentenced to death (and fined Rs 100,000 each) in April 2014 by Toba Tek Singh court district judge. Denying all the charges, they appealed to the Lahore High Court and now the total acquittal for not having committed the act has finally arrived. Two judges of the Lahore High court, after hearing the prosecution's arguments and defense lawyers, overturned the death sentence and ordered the release of the two detainees, who were in different prisons.
In the case of Shafqat and Shagufta, the misfortune had begun due to a small dispute between their children and the children of the neighbors. After the dispute, a plot was planned: the complainant Malik Muhammad Hussain, with the help of a friend, managed to steal a copy of Shagufta's identity document to obtain a SIM card in her name. In her statement, Shagufta claimed that she had never seen or used it and that Malik Hussain himself wrote and sent blasphemous text messages on behalf of the woman. In the course of the investigation, it was discovered that the text messages sent were written in English, while the two defendants are illiterate, do not know English and speak only Urdu, without having studied.
The police officers were also unable to retrieve the mobile phone and SIM Card used to send the SMS.
Kashif Aslam, deputy director of the National Commission "Justice and Peace" (CCJP) of the Pakistani Catholic Bishops, appreciating the decision of the judges, tells Fides: "This verdict is a defeat for all those who abuse the blasphemy laws, for fanatic circe and for those political leaders who deny the existence of cases of blasphemy based on false accusations, abuses or carried out for improper purposes; it is also a defeat for those who defame the organizations that fight for the rights of religious minorities". And he recalls: "In Pakistan people abuse the blasphemy law for personal quarrels or rivalries; many of the people accused of blasphemy are sentenced to death, there are even extrajudicial executions. We should prevent and approve norms and mechanisms to guarantee that the law is not abused or exploited", he concludes. (PA-AG) (Agenzia Fides, 4/6/2021)