ASIA/MYANMAR - Massive military operations in Kayah state: many people are on the run 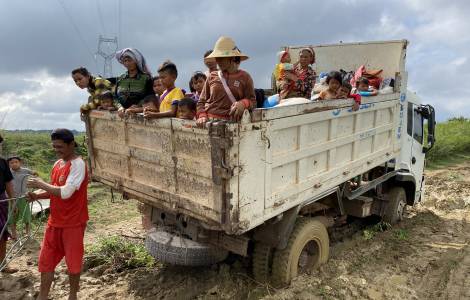 Loikaw (Agenzia Fides) - With a massive surprise attack, with airplanes, helicopters, heavy artillery, the Burmese army (Tatmadaw) has decided to quell the resistance in the Burmese state of Kayah, in eastern Myanmar, inhabited by the Karenni ethnic population.
In the state the Karenni People's Defense Force operate as part of the "People's Defense Force", popular defense forces that the Burmese population is organizing to resist repression throughout the Burmese national territory.
In the state of Kayah Christians make up about a third of the total population and there is a massive outflow of internally displaced persons: "The army is targeting the region, about one third of the total population of the state of Kayah was forced to flee for their own safety", reports to Agenzia Fides Fr. Paul Tinreh, local priest and pastoral coordinator of the Catholic diocese of Loikaw.
Since yesterday May 31st, the army has been bombarding the cities of Loikaw and Demoso with cannons, attack helicopters and fighter bombers. "Cities and villages have been heavily attacked without regard to civil security. Many people urgently need food, medicine and shelter as the rainy season begins and many have stomach problems, possibly due to dirty water and poor hygiene", compalins Father Tinreh. "In addition, the military has blocked all important access roads to the state to prevent people from receiving humanitarian aid. These military actions are regrettable and must be stopped immediately. The people are desperate", the priest notes. In Demoso, where two young Catholics were killed in recent days while bringing food to the displaced, the military raided and ransacked the Catholic parish house and the convent of nuns.
There is also an emergency in the city of Loikaw. In the bombing on May 29, Burmese soldiers killed Phrey Reh, 50, a Buddhist volunteer working with the Loikaw Catholic Seminary, which was forcibly searched by a patrol that terrified the surrounding area. The victim was a volunteer who helped prepare food for the more than 1,300 internally displaced persons housed on the seminary grounds. "The priests could not do anything to prevent the military from killing him. The army has been raiding the area around the institute, the convent of the nuns and the home for the elderly", he reports.
As a result of the intense bombing, the priest reports, 7 Catholic parishes in the diocese of Loikaw (the parishes of Deemoso, Dongankha, Tananukwe, Donganrao, Domyalay, Kayantharya and Loilemlay) have already been completely abandoned. About 5,000 Catholic families with around 35,000 believers were all evicted. The 15 priests, 24 nuns, 39 catechists and over 100 voluntary helpers who performed pastoral care and social and charitable work in these parishes are now available to care for the refugees, but humanitarian aid is scarce.
In the entire diocese of Loikaw, the Catholic population, all of the Karenni ethnicity, including the people who are in refugee camps located on the border between Myanmar and Thailand, exceeds 91 thousand. The ecclesial staff, now fully mobilized for assistance in this dramatic emergency, is made up of 79 priests, 6 religious brothers, 161 nuns, 214 catechists, 431 lay collaborators, divided into 58 churches, 136 chapels, 40 clergy houses and 47 diocesan convents. All Catholic structures, wherever possible, have been transformed into shelters for internally displaced persons. (PA) (Agenzia Fides, 1/6/2021)

EUROPE/SPAIN - Aid trucks leave for Ukraine from Pamplona and Madrid