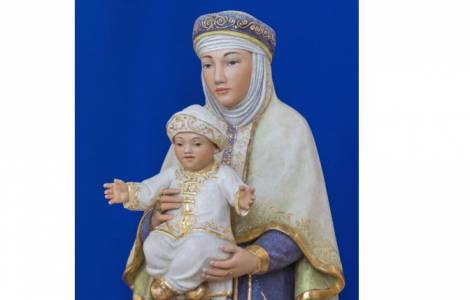 2021-08-26
The beatification process for Gertrude Detzel, missionary in the Gulag, opens

2021-06-30
Appointment of auxiliary bishop of Karaganda

Karagada (Agenzia Fides) - The spread of Covid-19 still keeps the Churches closed in Kazakhstan and the community of the faithful of Karaganda lived the Marian month "at a distance", but in communion with shrines all over the world. This is what Mgr. Adelio Dell'Oro, Bishop of Karaganda, tells Agenzia Fides: "Given the impossibility of gathering in places of worship, I sent a letter to all the faithful, inviting them to participate in the spiritual 'marathon' desired by Pope Francis, a Marian prayer that involved 30 shrines from all continents. Those who could not participate due to the time difference, still had the opportunity to pray the rosary transmitted daily by the diocese of Almaty and by the parish priest of the Cathedral of Karaganda".
Marian worship is lived with great devotion by the faithful of Karaganda. The cathedral, dedicated to Our Lady of Fatima, houses various Marian representations, such as the only statue of the Virgin depicted with Kazakh clothes and features. Mgr. Dell'Oro retraces its history: "The 'Queen Mother, Virgin Mary of Karaganda' was given to us by Maria Luisa and Marisola Lopez Fernandez, professors at the University of Navarra who years ago, during a period of teaching in Kazakhstan, noticed that the cathedral lacked references to local culture". The oak wood statue was sculpted and decorated by the artist Remy Insam and represents the Virgin Mary, who seems to offer the Child Jesus: "This extraordinary representation reminds us of the truth of the mystery of the Incarnation, the Son of God, made flesh, became Emmanuel, God with us, true Man, one of us. Therefore, the Mother of God has a characteristic delicate face and the clothes of a Kazakh girl, of a young mother", says the Bishop.
The statue was blessed on the occasion of the 7th anniversary of the consecration of the Cathedral, which was also attended by the Bishop of Fidenza, Mgr. Ovidio Vezzoli. Mgr. Dell’Oro says: "On that occasion I also invited the most important imam in the region, to whom I asked to tell how Muslims venerate Mary.
At the end of that celebration, I received the significant testimony of two Kazakh women: one told me that from that moment on she would really feel at home, while a young girl told me that she recognized herself in the features of the face of this statue".
The Cathedral also houses other Marian representations, including a statue carved from a tree from Fatima, in memory of the Virgin to whom the Cathedral is dedicated, and the triptych of Our Lady of the Lagers of Karaganda, which recalls the history of the sufferings of the Kazakh people during the Soviet period.
Today, the city of Karaganda has 4 Catholic churches, an international seminary and a cloistered convent of Carmelite nuns. The diocese of Karaganda includes two regions and occupies a territory that is two and a half times the size of Italy. The approximately 20 parishes are separated by enormous distances: the farthest are 1700 km from each other. In total, there are 4 Catholic dioceses in the entire territory of Kazakhstan, for a total of 70 parishes. The country has 91 priests, including 61 diocesans and 30 religious. Catholics represent a small minority: according to official data provided by the Kazakh Foreign Ministry, of the country's over 17 million inhabitants, about 26% are Christians, and 1% of them are Catholics. (LF-PA) (Agenzia Fides, 1/6/2021)